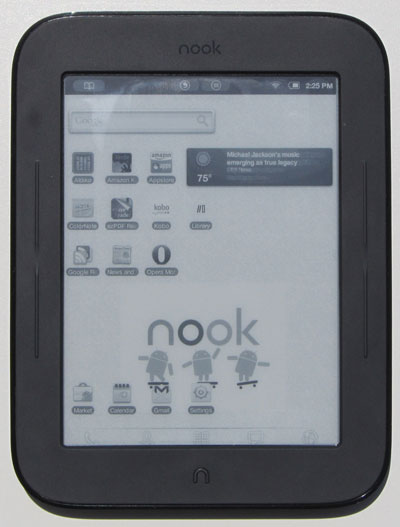 Below are some super-easy directions for rooting the Nook Touch to install Android apps, with Android Market access. The first video shows the rooted Nook Touch in action running various Android apps, including several ereading apps like Aldiko, Kindle, and Kobo, as well as the Opera web browser, which works much better than the stock browser. Below that there's a second video showing exactly how to root the Nook Touch using a Windows computer, along with written directions.

Update: Follow these different set of directions for rooting the Nook Touch with GlowLight using GlowNooter.

Update #2: Unfortunately this method of rooting no longer works with the newer 1.2.x firmware. Thanks a lot, B&N.

The entire rooting process took me less than 10 minutes to go from stock Nook Touch to rooted Nook Touch. It is very easy and doesn't require any complicated steps. All I did was follow the directions on this thread at the XDA forums. They may be hard to follow if you are a beginner so here is a video tutorial and some easy-to-follow written directions:

Update: Check out this second Rooted Nook Touch Tutorial to learn how to fix the broken search feature for the Android Market if it's giving you troubles, how to install and uninstall apps, change the appearance and placement of Button Savior, and other helpful tips and tricks for getting started with the rooted Nook Touch. And here's another post worth mentioning: Nook Touch Working Apps List.