First off, let's talk about terminology. These are the words you'll most likely come across when researching ebook readers.

E Ink is the name of a company that manufactures electronic paper displays.

E Ink Vizplex, E Ink Pearl, and E Ink Triton are the names of their different types of electronic paper. Pearl screens are used in almost all the ebook readers on the current market. Triton displays are the only ones with color.

Electronic paper, also called epaper, is a general term for the display technology that aims to mimic the appearance of ink on paper.

The science behind epaper is called electrophoresis, and an electrophoretic display is basically the rearranging of charged pigment particles by applying a small electric field to them.

Check out The eBook Reader Blog for the latest E Ink News and new products.

One of the things that makes ebook readers so popular is the easy-to-read, high-contrast screens that simulate the look of the printed page. Because it incorporates E Ink panels, the epaper doesn't require battery power while the text is on the screen.

Energy is used when flipping pages as an electric charge rearranges the e ink capsules to either white or black to display the text. This results in a long battery life that lasts for approximately 6000-8000 page-turns, depending on the reader.

Electronic paper refreshes the screen as you turn each page, causing it to blink for a split second. Like print, the text is very crisp and clear, and can be viewed comfortably in bright light, unlike backlit computers and phones.

E Ink displays are formed by printing ink onto thin sheets of plastic film that are laminated to a layer of circuitry. The circuitry can be controlled by a display driver to form patterns of pixels on the film. Pearl active matrix electronic paper display (EPD) is one example, and the most popular among ereaders. E Ink also makes segmented epaper displays, and have prototypes of both of these on their website, if you want to learn more.

There are a number of companies that make different kinds of electronic paper. Pixel Qi is working with modifying LCD technology. Qualcomm is working with a new display technology based on the study of biomimetics, and inspired by the way light hits a butterfly's wings.

In Japan, Fujitsu Frontech has already developed color epaper for their FLEPia ebook reader. And there several more companies too; the future of epaper and ereaders is quickly changing.

Other Applications for ePaper

As the technology advances, epaper will be applied to many other types of materials. In October 2008, a limited edition of Esquire magazine featured a cover with flashing text.

Other applications of electronic ink include wristwatches, which have been on the market for several years in a few different varieties. Cellphones are starting to use the technology for their displays too, and the Samsung Alias 2 incorporates it into the keypad to change characters.

As color technology evolves, digital photo frames will be vastly improved over the current technology. Electronic paper requires such small amounts of power that the image could remain for several months to years with a small battery pack. 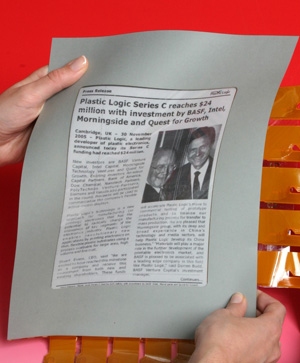 Because of its versatility, e ink can be applied to a number of flexible materials.

With a steady supply of power, newspapers could use the technology to make moving text and images, much like the fictional Daily Prophet.

However, the paper wouldn't have to be delivered by owls or humans. People could carry a small rolled-up sheet of plastic around that could receive updates directly to it or through an external connection.

It's even possible to print electrophoretic displays on T-shirts, product labels, and scroll-like paper that can be rolled up.

The future of epaper is very broad in scope, and its use is virtually limitless. We'll be seeing a lot more interesting ways it can be utilized in the coming years.