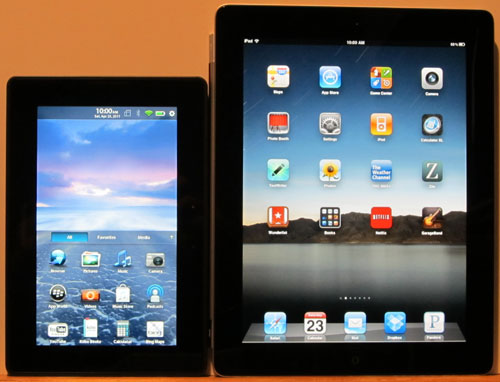 The Apple iPad 2 and BlackBerry PlayBook are two of this year's top tablets from two big-name companies in the mobile device industry. The iPad has had a full year to mature into the iPad 2, while the PlayBook is still in its infancy. This makes comparing the iPad 2 vs the PlayBook somewhat difficult at this point, but a comparison is still in order for those trying to choose between the two.

In the end there's no question that the iPad 2 wins in this head-to-head matchup. It has way more apps, better battery life, and more value for your buck. But that doesn't mean the BlackBerry PlayBook isn't a quality tablet. In fact it has a lot of potential. The operating system is extremely smooth and fun to use, the screen colors are bright and detailed, and the overall experience with the PlayBook is positive. It just needs more time to mature, for more apps to be developed. The iPad 2 on the other hand is ready for primetime off the shelf.