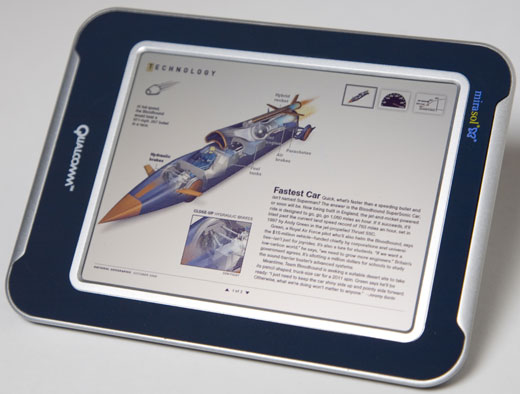 Technology Details - How It Works

Qualcomm's Mirasol color displays utilize a technology called IMOD—interferometric modulator display—which is based on the study of biomimetics, and is inspired by the way light hits a butterfly's wings, according to the Mirasol website.

The color of the light depends on the height of the gap between the membrane and the reflective film. And the display can be switched from black to color by applying a small electric charge to the film layer.

In this way, Mirasol displays are similar to E Ink in that they require little to no power while displaying an image on-screen. Energy is used when turning pages, when the screen refreshes.

The Benefits of Mirasol Displays on eBook Readers 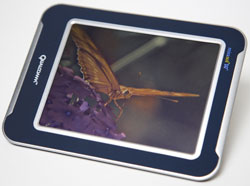 Qualcomm does not plan to market their own ebook reader. The one featured in the video and pictures is a concept model to show other manufactures what they could achieve with Mirasol displays.

Ebook Readers with these types of displays are expected to hit the mainstream market in Fall of 2010.

And the most likely candidate for this technology is the next Amazon Kindle. Engadget has this to say . . .

"We spoke at length with executives, and they're currently predicting an ebook reader running Mirasol in Fall of this year. What we've heard "around" is that the device will actually be new Kindle running a Mirasol display -- we can't confirm it, but it sounds logical."

Given the improvements of IMOD technology over LCD displays, such as lower power consumption, increased visibility in bright light, and being unaffected by extreme temperatures, there could be a wave of new devices in the coming months that feature this new type of display.

In fact, they are already being used on mobile phones, GPS units, monitoring systems, and more. And there's speculation about this technology being applied to tablets and laptops.

The main question to the advancement of IMOD technology will be its ability to integrate some form of illumination for better viewing quality in low-lighting situations, while still being able to maintain a minimum drain of battery.