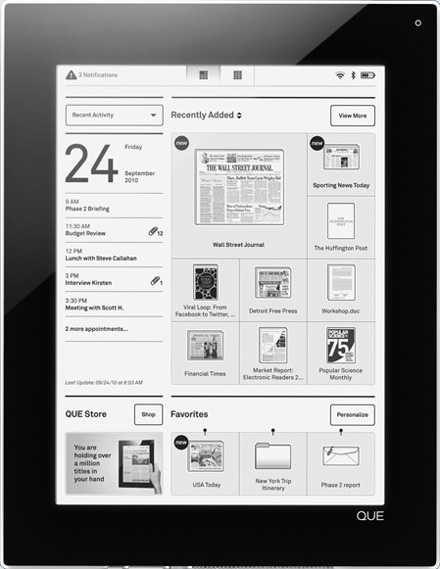 Plastic Logic officially unveiled their new business-oriented ereader, the QUE proReader, on January 7th at the Consumer Electronics Show. The Que's anticipated released date is in mid April, and it is currently available for pre-order on the QUE proReader website.

Update: The QUE proReader has officially been cancelled.

On March 11th, people who pre-ordered a QUE received an email from the CEO of Plastic Logic, Richard Archuleta, that stated the postponement of the QUE proReader until Summer "in order to fine-tune the features and enhance the overall product experience." And now it has been finished off for good.

The Que will sell from Barnes and Noble's retail stores later in 2010.

Designed by scientists at Cambridge Universitys Cavendish Laboratory, Plastic Logic utilizes flexible plastic technology that has been in development for 10 years.

It features a gesture-based captive touchscreen for navigation, and a virtual keyboard for taking notes. Also, Plastic Logic claims the screen is shatterproof.

Plastic Logics strategy is to aim its product at business professionals, given the large screen and support for Excel, Word, PowerPoint, and PDF.

Like the Kindle DX, its designed for reading newspapers, periodicals, business documents, textbooks, and PDF files, as well as ebooks and text files. AT&T will give the device both 3G and Wi-Fi capabilities, depending on which model you choose, and AT&T works with carriers in other countries, so opportunity for expansion is there, but for now it is a US-only product.

In a recent press release, Plastic Logic revealed plans to offer an email and calendar service for the Que in Fall 2010 through a partnership with Good Technology.

From the press release:

By integrating with Good for You, the planned QUE Mail and QUE Calendar services enable mobile professionals to have email and calendar updates from a broad range of popular email and calendaring services, including Yahoo!, Google, Windows Live, and Microsoft Exchange, automatically pushed directly to their QUE devices over WiFi and 3G networks.

We are extremely pleased to be working with Good Technology, a leader in mobile device services, to accelerate development of a world-class email and calendar service and experience for the QUE proReader, said Plastic Logic CEO Richard Archuleta. Good is a trusted brand for mobile professionals and gives us a strong foundation for expansion into the enterprise, government and other verticals.

In addition to having access to Barnes and Noble's library of ebooks through the Que store, Plastic Logic has partnered with a number of leading business, news, and sports publishers to provide more content for the Que. Some are listed below.

Another content partner is Olive Software, a well-known digital publishing company with some 400 organizations using their software to publish on the internet, including newspaper and magazine publishers, major libraries and universities, and even government institutions. Some are listed below. 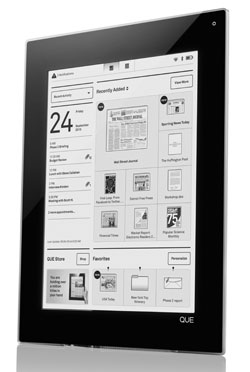