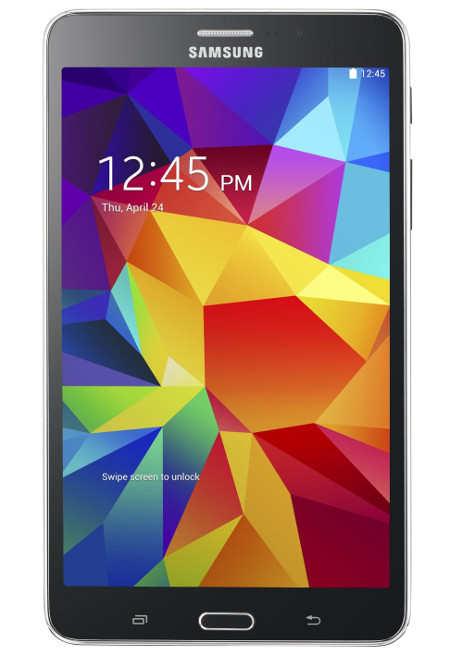 Samsung released their 4th generation line of Galaxy Tab tablets on May 1st, 2014. There are three tablets in the Tab 4 series. All share the same specs and features, and all have 1280 x 800 resolution screens. The only difference between them is the screen size. There are 7-inch, 8-inch, and 10.1-inch models.

This review covers the 7-inch Galaxy Tab 4 model specifically, but can be applied to the other models as well, since the size is the only real difference. The 7-inch Tab 4 sells for $199, the 8-inch for $269, and the 10.1-inch is $349. That's the suggested retail price, however; the latter two are already on sale for $30 less than that.

The first thing that jumps out about the 7-inch Samsung Galaxy Tab 4 is how small it is. In fact it's the smallest 7-inch tablet that I've seen, shaving even more off the sides than the 2nd gen Nexus 7. The side bezels when holding the device in portrait mode are too small to rest a thumb on, but that doesn't matter because the device is narrow enough to hold with your fingers wrapped around it more like you would hold a phone.

That's the second thing that jumps out about the 7-inch Galaxy Tab 4. How phone-like it looks and feels. The design is almost identical to Samsung's smartphones with the overall shape, the silver border and button placement.

The home button is an actual physical button, whereas the back and recent apps buttons are capacitive sensors, and they are below the screen instead of apart of it like most Android tablets. There are additional physical buttons along the side for volume and power. The Tab 4 series also include an IR sensor that lets you use the tablet as a universal remote control.

The Galaxy Tab 4 tablets all have 1.2 GHz quad-core processors and 1.5GB of RAM. That's fast enough but not as fast as something like the 2nd gen Nexus 7. I ran a few benchmarks for comparison. The quadrant score was 3621. AnTuTu came in at 12545. Good enough for multi-tasking and for playing most games, but not the kind of numbers you'd expect on a high-end gaming tablet.

I already wrote about the screen in detail, basically saying that Samsung screens are better than expected despite the lower resolution, so I won't repeat all that here.

The overall build quality of the 7-inch Tab 4 feels solid. There's no creakiness or bend when torquing the frame. The back has a subtle texture to it and doesn't feel like cheap plastic common on inexpensive tablets. The silver border adds a nice classy touch. The Galaxy Tab 4 is definitely sexier and better-looking than most of its Android competitors.

The Galaxy Tab 4 tablets run Android 4.4 KitKat and come with the usual suite of Google apps and Google Play access. Samsung also has their own appstore onboard with some exclusive apps, such as the Kindle for Samsung app that comes with one free ebook per month.

One of the most interesting things about Samsung's devices is the custom software tweaks.

Instead of offering a straight-up copy of stock Android like most devices, Samsung customizes it with their own style. The homescreen and menus are different, fonts are larger and easier to read, the colors of menus are custom. There's no onscreen menu bar at the bottom of the screen with buttons because the tablet has it's own dedicated buttons below the screen on the bezel. The recent apps list includes an option to close all apps, and there's a link to open the task manager to mange running apps.

The coolest thing about Samsung's custom software is the ability to run two apps side-by-side at the same time. Holding the back button brings up a list of apps on the right of the screen that can be used for multi-tasking. Basically all you have to do is drag an app icon from the list and it will open in the widow. Then you can drag a second app from the list and it split the screen so that you can view both apps at the same time. There's a little slider icon that you can use to make the viewing area for one app larger. You can even drag content such as text and pictures from one app to the another, and you can have the same app open twice.

The only downside with multi-tasking is that it doesn't work with all apps. Mostly it works with text-based apps like email, web browsers, and note apps. Video, photo, and music apps work too, and a few ebook apps.

The Galaxy Tab 4 comes with a few extra apps from Samsung. There's a handy memo app, a world clock app, a talking personal assistant app, an app for using the tablet as a remote control, and there's an office app called Hancom Office Viewer for office documents and PDFs.

This is the first Samsung tablet that I've reviewed. I never understood why people chose Samsung tablets when there are almost always other brands with better specs for less money. But now I can see why Samsung's tablets are as popular as they are. They may not have the best specs or lowest prices, but they have the appearance and feel of good quality tablets, at least that's the case with the Tab 4 line.

I wasn't expecting to like the 7-inch Samsung Galaxy Tab 4 as much as I do. I automatically expected the lower screen resolution to be a negative, but it's hard to complain about the screen once seeing it in person. And I like Samsung's custom OS tweaks better than stock Android—it's cleaner, more functional, and the color and font combinations work well together. Overall the 7-inch Galaxy Tab 4 is a good solid tablet. The price could stand to be a little lower to compete better with similar tablets, but Samsung does offer some unique benefits.