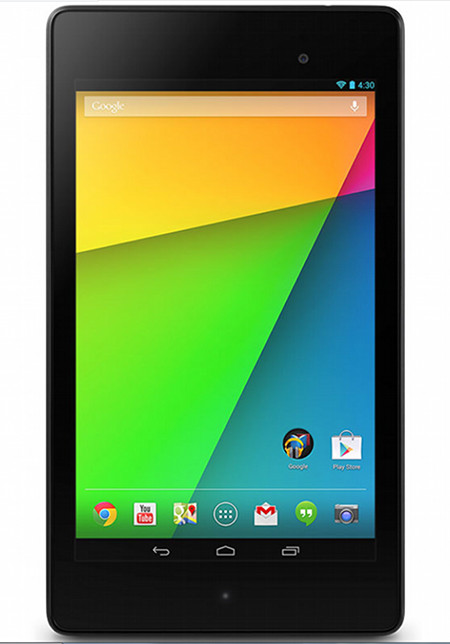 The original Nexus 7 was a huge success for Google, especially considering it was their very first tablet. Now Google is looking to replicate that success with the 2nd generation Nexus 7, released the last week of July 2013.

There are three variants of the 2nd gen Nexus 7 available. There's a 16GB model for $229, a 32GB model for $269, and a 4G LTE option for $349. Yes, Google raised the prices this year; despite the improvements, that decision could come back to bite them in the end.

I wasn't expecting to like the new Nexus 7 very much. When all the early details leaked, I was disappointed by the fact that Google didn't add a memory card slot or HDMI port or any revolutionary new features, but still managed to jack up the price. Sure they added a rear camera, upgraded the processor, increased the resolution of the screen, and added a few other things, but that's all par for the course in yearly tablet upgrades and doesn't warrant a price increase, in my opinion.

That being said, after using the device extensively, it's clear that the 2nd gen Nexus 7 is going to be one of the best 7-inch tablets that money can buy for the foreseeable future. It's not some cheap Chinese import; it's a well-built, highly capable device that is incredibly smooth and fast to operate, even with the most advanced apps and games. And the screen is absolutely spectacular—it is its best feature. The 2nd gen Nexus 7 has a few shortcomings, but after holding it in your hands and using it for awhile it's almost impossible not to like it.

Once again Google's Nexus 7 tablet is being made by Asus, whom is no stranger to making Android tablets. This year's Nexus 7 is quite a bit different from last year's model. It's about a quarter inch taller and a quarter inch narrower, a few millimeters thinner, and about 2 ounces lighter. That may not sound like much, but you can sure feel the difference when holding it in your hands. The new Nexus feels much thinner and lighter. It's the first tablet that I've tested that feels almost as light as an ebook reader.

That makes it good for holding for long periods of time, say while reading an ebook. In portrait mode the device is narrow enough to hold one-handed wrapping your fingers around the sides. The side bezels are so tiny that it takes some getting used to at first. The device seems a little more natural in landscape mode with the top and bottom bezels being so large.

I was disappointed to see that they changed the back of the 2nd gen Nexus 7. The first one had a faux leather stippled back that was very unique. The new model has a more generic tablet design with the soft-textured back, but it feels good in-hand, although it is a little slicker than I'd like.

As far as specs are concerned, Google’s latest 7-inch tablet runs Android 4.3 Jelly Bean and comes with front and rear cameras (1.2MP front and 5.0MP rear), Bluetooth, GPS, NFC, and wireless charging. The device has a quad-core 1.5Ghz Snapdragon S4 processor with 2GB of RAM and an Adreno 320 graphics chip.

The rear camera is a new addition, but it's hardly worth the wait. It will take okay pictures but there's no flash and all the pictures I take seem to be a little fuzzy and pixilated; I'd just rather use a real camera—nuts to it.

A new feature that I haven't seen elsewhere on tablets is pulse notifications. There's a little LED light on the front of the Nexus 7 that flashes periodically when you have a new email or notification. Quite handy.

Like last year's Nexus 7, the new model lacks a microSD card slot and HDMI port. The latter isn't a big deal because the 2nd gen Nexus 7 supports Slimport adaptors so that you can plug an HDMI cable into the micro USB port using an adaptor. I did not test this out, however, because I don't want to spend another $30 on an adaptor when I have other tablets that can connect to a TV with a regular $5 HDMI cable.

The 2nd gen Nexus 7 is blazing fast with the quad-core 1.5 GHz processor, but honestly most people aren't going to notice much of a difference between the new Nexus and the old. The speed difference isn't very significant, except for maybe some of the high-end video games.

One game I tested called NOVA 3 does stutter a bit on the old Nexus 7. I always thought it was the game's fault, but not so because it plays as smooth as butter on the new Nexus 7.

The 2nd gen Nexus 7 has much better speakers than the first. There are speakers on each side of the device so it has more of a stereo sound. The speakers are also much louder. They are right where you put your hands, however, so they are prone to being muffled somewhat. Nothing beats a nice pair of Bluetooth headphones...

The second generation Nexus 7 is the first 7-inch tablet to have a 1920 x 1200 resolution screen. That equates to an impressive 323 pixels per inch, which is the most of any tablet to date. By comparison last year’s Nexus 7 has 216 ppi, and the Nook HD, which had the highest resolution screen of any 7-inch tablet until now, has 243 ppi. The new Nexus 7 takes screen sharpness to an entirely new level.

Text is incredibly clear and easy to read on the 2nd gen Nexus 7. The screen alone makes it one of the best tablets for ereading. Not only does it show a lot more details, but colors are a lot brighter than the previous Nexus 7. The pictures at the top of this page show both Nexus 7's side-by-side with the brightness all the way up.

I hear some people saying that the new Nexus 7's screen is overkill for ereading and that devices with 1280 x 800 resolution screens like last year's Nexus 7 are good enough and you can't tell much of a difference. Those people are flat wrong. The higher resolution screen on the new Nexus 7 makes text much clearer and easier to read. When just reading regular ebooks the difference isn't significant enough to warrant an upgrade unless you are using smaller text sizes, but with other forms of ereading—magazines, comics, web reading, PDFs—there's a huge difference in terms of readability with the smaller text used on those forms of content. Everything is so much clearer on the 2nd gen Nexus 7's screen. On a smaller 7-inch screen all those extra pixels really do come in handy for reading because you no longer need to zoom in on everything to read it.

An important aspect often overlooked when evaluating a screen is how adjustable the brightness level is. That's one good thing about the new Nexus is the brightness goes from bright enough to read outside in bright light to dim enough to read at night with the lights turned off without bothering your eyes too much. I find that most Android tablets, including the original Nexus 7, have a screen that is too bright for reading at night. I often have to use a dimming app to get the brightness lower than the minimum system setting. Not so with the new Nexus 7.

The Nexus 7 uses an ISP screen so the viewing angles are really strong. It's serviceable for reading outside because the screen is so bright, but like any LCD tablet it's not ideal. As long as the screen is kept clean and it isn't in direct sunlight it's not bad. But nothing beats good ole E Ink for outdoor readability.

The smallest overall change to the new Nexus 7 is the software. In fact runs the exact same software as the old Nexus 7. Google updated Android to 4.3 recently, but it's still called Jelly Bean and there's very little difference between Android 4.3 and Android 4.2 found on other tablets. Android 4.3 adds support for user profiles, and it has better security, but that's about it. There's really nothing new to talk about here.

Nexus 7 as an eReader

Generally I feel that 7-inch tablets are too small for an enjoyable comic/magazine reading experience, but the 2nd gen Nexus 7 is able to pull it off because of the super high resolution screen. Normally the small text for comics and magazines is too difficult to comfortably read on a smaller screen, but not so with the 2nd gen Nexus 7. The screen still feels a bit narrow for that type of content, but comics and magazines look great and are generally readable without needing to zoom in.

I tested some of the free magazines I got from the library with the Zinio app and they look great. The Android version of the Zinio app isn't quite as fast and smooth as the iPad version, but it works well enough.

One of the things I was glad to see with the new Nexus 7 is that it doesn't suffer from the screen flickering issue that affected my original Nexus 7. That makes it much better for reading. Overall the screen is great for all forms of reading. Ebooks look great with really sharp and clear fonts.

The Nexus 7 comes with Google Play Books, of course, which now supports sideloading your own collection of ePub ebooks, and it can install any other ereading apps too, including Kindle, Kobo, FBReader, Aldiko, Mantano, Adobe PDF, Overdrive, Comixology, Nook, and plenty of others—you'd never run out of reading material with all those.

I plan on reviewing specific reading apps and comic and magazine apps on the 2nd gen Nexus 7 soon, so stay tuned to the Google Nexus section of The eBook Reader Blog for more.

Who Should Buy the Nexus 7 II?

In my opinion, the Nexus 7 II is the best 7-inch tablet that money can buy at this point in time (August 2013). And it's hard to see it being surpassing anytime soon. The next gen Kindle Fire HD might come close, but as long as Amazon's tablets are locked into Amazon's ecosystem and use Amazon limited interface, they aren't going to appeal to everyone. If you want the latest and greatest gadget with the best screen and can justify the extra expense, the 2nd gen Nexus 7 is definitely the tablet to get. For the budget conscious, something like the Nook HD or Hisense Sero 7 Pro is going to be hard to pass up for $80-$100+ less, especially since they both have microSD card slots.