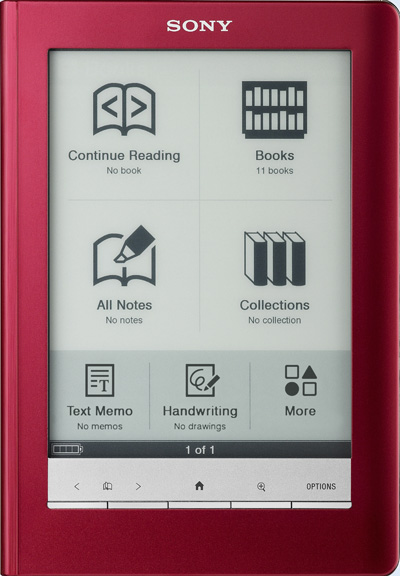 Update: On September 1st, Sony announced upgraded versions of all 3 of their ereaders! Check the main Sony Reader reviews page for all the details.

The Sony PRS-600 is the latest 6-inch ebook reader in Sony's new line. Also called the Touch Edition, it is an improved version of the short-lived PRS-700, which received harsh reviews for contrast and glare issues because of the touchscreen and built-in LED sidelights.

Sony removed the sidelights from the PRS-600, helping to reduce glare, and added some new features. They also dropped the price under $300.

Although there are a few drawbacks, the main feature that sets the Sony PRS-600 apart from its competitors is the touchscreen. You can use your fingers or the equipped stylus pen to turn pages, highlight, zoom and pan, and type notes with the on-screen keyboard. You can also write directly on the screen using the stylus and export these notes and drawings to view on your computer in Sony's software.

Another major benefit of the touchscreen is the built-in dictionary. If you double tap on a word with your finger or the stylus it cues the Oxford American (or English) eDictionary to quickly pop up at the bottom of the screen. You can add the word to your notes, search for more occurrence of it in the ebook, or choose to view the listing in the dictionary, where can also check other definitions using the on-screen keyboard. 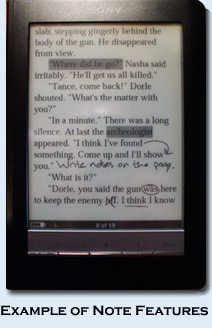 The on-screen note-taking feature of the Sony PRS-600 is something no other 6-inch ereader has, and is the main advantage it has over the Kindle and Nook. There's a bit of a delay between moving the stylus and the appearance of the ink, but it's easy to get used with some practice.

As the editor of this website, I have write and edit all the time, and the PRS-600 is great for uploading a Word file, which it converts to RTF, and then I can write notes and corrections directly on the screen as if it were a printed page.

Editing on the Touch Edition is a nice break from sitting at the computer; I can lounge back in a chair and sit comfortably, and the E Ink is a lot easier on my eyes after staring at an LCD screen all day.

Then I can easily reference the PRS-600 for revisions as I re-type an article or review. The only thing it's missing is a built-in thesaurus to go along with the dictionary, which would be useful when editing documents.

The Touch doesn't have any built-in speakers, but it does have a headphone jack and can play MP3 and AAC audio files. It will also display image files: JPEG, GIF, PNG, and BMP.

For text files it supports Adobe EPUB and PDF, giving the 600 a wide range of options for ebooks, including your local libraries. It also supports TXT, RTF, and Word files (DOC and DOCX).

It comes with 512 MB of internal memory, enough for 350 or so ebooks, and has expansion slots for Pro Duo and SD memory cards.

An oft mentioned perk of the Sony PRS-600 is its speed. It has no problem quickly loading a thousand page book, or changing text size on the fly.

In reviewing the PRS-300, it takes noticeably longer to load ebooks and to reformat a book with larger text.

And the 600 can skip through pages if you hold down the button or your finger on the screen, and you can watch the pages go by without any resetting flash, something other ebook readers cannot do.

The same can be said about Zooming and Panning PDF files; there's no flash or delay as you zoom or pan around a page. Speaking of PDFs . . .

The Sony PRS-600 and PDF Files

Because of the Zoom and landscape mode features, the Sony PRS-600 is good for displaying PDF files. While it's not perfect, it's much better than other 6-inch ebook readers, and is very quick to react.

With the custom Zoom you slide a dial with your finger or the stylus to your desired level of magnification. You can pan around the page with on-screen arrows or you can drag the page by holding down and dragging on the screen. The Zoom works as if you are viewing an image.

One annoying thing about the Zoom, however, is that it resets whenever you turn pages. You also can't add notes or check the dictionary while in Zoom mode because it's an independent feature that has different touchscreen commands to facilitate panning.

If you just want to increase the text size you can increase it to five levels like any other ebook, but images will usually not show up when doing this and formatting may change.

If you add notes to one text size setting they won't show up on another setting. Instead, a bookmark icon appears in the corner. If you click on it you can view your notes in the text size you originally made them.

All the PDF ebooks that Ive tried work well, with the exception of one that ended up having text that wasn't very dark. I converted this one to EPUB with Calibre and that corrected the problem.

I've tried a few graphic novels and they displayed a lot better than I thought they would. The image detail is surprisingly good, and the text was easily readable on the ones I tried, but I've heard of others rendering to small to read without zooming.

The main thing with PDFs is this: readability and formatting of all ebooks, and PDFs especially, greatly depends on where you download them from and how the original is formatted, so results will vary. 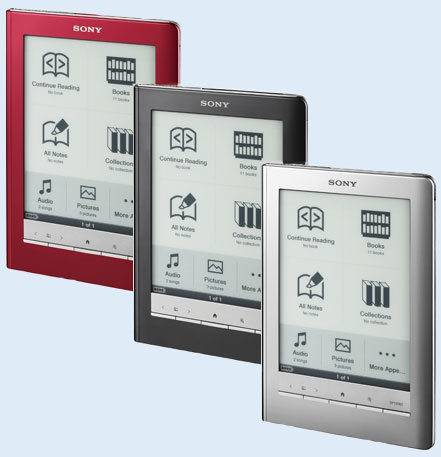 Sony's readers are probably the most solidly built ebook readers on the market. The metal casing of the PRS-600 feels strong and durable in your hand; it's not made of hard plastic like other ebook readers. It looks sleek too, and the rubberish coating on the back has a nice feel. The stylus is a little on the small side for my personal taste, but it fits nicely inside the frame of the reader when you're not using it.

Something To Consider Before Buying  Glare and Contrast

Some people have an issue with the glare and contrast of the Touch Edition's touchscreen, and others do not. What it comes down to is your personal preference.

When comparing the Sony PRS-600 to other E Ink ebook readers, you'll notice that the text isn't quite as dark. This is because of the added layer required for the touchscreen.

This also causes more light to shine on the screen, so there's some reflectivity created at certain angles, but I've found it's easy to avoid by tilting the device slightly one way or the other; this seems to bother some more than others.

The screen display looks best in bright lighting conditions, almost as good as the 300.

The one place where you'll notice that the text isn't as dark is in lower lighting conditions. If you are sitting in bed at night and the lamp is across the room, you'll find that it isn't as easy to read as other ebook readers. As with all E Ink ereaders, a good source of light makes the display look sharper, and this applies a little more to the Sony PRS-600.

But if you are willing to compromise a little on the darkness of the text, or if the Sony PRS-600 is your first ebook reader, you'll likely have no problem with the way the text appears, and you'll enjoy the perks and ease of touchscreen navigation. Just take into account that a bright, even source of light is the best way to avoid any glare issues. And a good clip-on reading light can help.