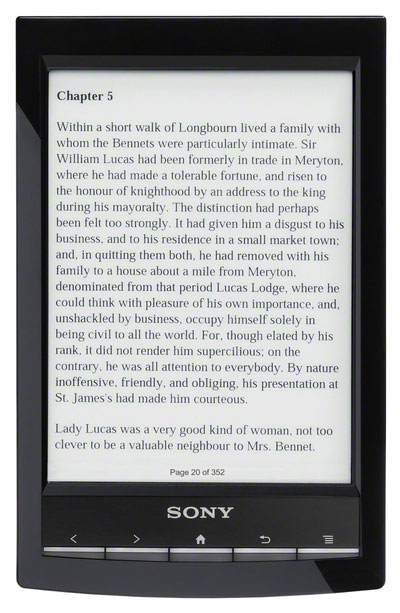 The Sony PRS-T1, also known as the Reader Wi-Fi, marks a big change for the Sony Reader brand. Sony did away with the aluminum casing that made the previous models unique, replacing it with plastic, and completely changed the user interface to boot. They added Wi-Fi, direct library downloads, and a competent web browser, among other upgrades.

The Reader Wi-Fi is sold in the United States, Canada, United Kingdom, several European countries, Japan, and others. It comes in three different colors, white, black, and red. The Sony eBook Store is available in the US and Canada, and is supposed to be expanding to the UK later in 2011 and other parts of Europe in 2012.

The PRS-T1 is a pleasant surprise from Sony. They managed to cut the price from previous models considerably, and add a bunch of new features without sacrificing any of the ereading features from before that made the Sony Reader brand so popular. It has a few quirks, but still manages to be one of the top ebook readers overall.

Not only did Sony move from aluminum to plastic, they gave the PRS-T1 a new symmetrical design. The rounded left edge of the older models is gone. The buttons are the same, they just replaced the zoom button with a back button, and removed the physical volume buttons for an on-screen slider bar.

Like many ereaders today, the back of the Sony PRS-T1 has a soft rubbery coating. It has a pleasant feel but is rather prone to showing smudges and scratches.

The front is glossy plastic around the edges and matte plastic just below the screen above the buttons. The glossiness of the plastic isn't a big deal but it can be annoying at times. For instance, when using the lighted cover light reflects off the top edge. It can be distracting unless you position the bulb just right, and even still there's always a little line of light reflecting along the edge. This might not be as noticeable with the white or red models as with the black.

On the bottom edge of the device there's a reset button, mini USB port, headphone jack, and power button with LED light. There's a microSD card slot along the left side hidden behind a flap. The Reader has 2GB internal memory and accepts cards up to 32GB.

The software on the PRS-T1 is a lot different from the older Sony Readers because it was build off of Android. Everything looks and works differently, but it incorporates all the features of the older models.

The menu systems are all new, and so are the touchscreen functions. It's more intuitive than it was before, but on the downside it doesn't feel quite as polished. It's a little rough around the edges and sometimes the device operates laggier than it should. It could benefit from some firmware updates, but Sony is notorious for rarely issuing firmware updates for its Readers...hopefully that will be different this time.

Fonts: For EPUB and TXT files there are eight font sizes and seven font choices. The new font choices are great and are one of the best new features that Sony added. The Reader remembers all your font settings for each particular ebook—font type and size, landscape mode, cropping, zoom, etc. There's a setting in Application Preferences for setting the font size default for EPUBs too.

I noticed a few glitches with the new fonts, however. Font sizes often differ greatly from one ebook to the next. And sometimes when changing fonts it changes italics to regular text, other times not—makes no sense. Also, one of my ebooks won't change from the default font for some reason—the same ebook changes fonts in other ebook readers just fine.

Notes and highlights can be exported by using the Sony Desktop Software. You have to add the ebook from the Reader to the library, open the document, then select export in the bottom right corner. This exports the notes and highlights to an RTF file. Handwritten notes are saved as an image within the RTF.

There are also standalone drawing and text memo applications on the second page of the homescreen.

Navigating: Page-turns work by swiping the touchscreen, not tapping. There are dedicated page-turn buttons too, of course. Tapping the page numbers at the bottom of the screen brings up the navigation menu. From there you can enter a specific page number to go to, use the page slider, access the table of contents, which supports multiple levels, and enter history mode. History remembers all the pages previously visited so you can jump forward and back quickly; it works great for when reading in a non-linear manner.

Dictionaries: Holding down on a word brings up a small window with the definition. Tap the definition and the full dictionary launches. Tap the dictionary's name to select from other dictionaries. There are twelve in all, 2 English language (British/American) and 10 translation (to and from French, German, Spanish, Dutch, and Italian).

Customize View: Custom view is mostly for PDFs, but it can be used for ebooks too. The most useful feature for ebooks is crop page. It has auto and manual settings. This gets rid of margins; it works quite well for some ebooks and PDFs but not all.

Landscape Mode: Landscape mode is a big improvement over earlier Sony Readers. Gone is the overlapping gray text; each page consists of new text now. Plus the PRS-T1 is very comfortable to hold in landscape; your thumb naturally sits on the page-forward button.

Collections: The PRS-T1 uses collections like the previous Sony Readers. You can create them on the device or by using the Reader software. Collections are essentially single-level folders to organize content. It would be a lot easier if it just supported folders directly instead of having to create them for everything. Calibre will create collections automatically based on tags, but the version that supports the Sony PRS-T1 wasn't released yet as of this review.

Misc eReading Features: Other features include running searches within a book, on Wikipedia, and Google, adding bookmarks by tapping the upper-right corner of a page, adjusting contrast, and fast scanning through a book by holding down the page buttons.

Since the PRS-T1 has Wi-Fi, it connects to the Sony Reader store for ebooks and periodicals. It also has Google Books built-in, but this is referring to Google's free public domain ebooks, not their entire ebook store, which can be visited with the web browser instead.

Something unique, the Sony PRS-T1 can download library ebooks directly without having to transfer them with Adobe Digital Editions. It's one of the few ereaders on the planet that can do this. Click here for the library ebooks review for the full details.

Aside from the Sony eBook Store, you can get ebooks for the PRS-T1 from any ebook store that sells Adobe EPUB and PDF, which most do. You can also get loads of free ebooks and DRM-free ebooks from various websites too.