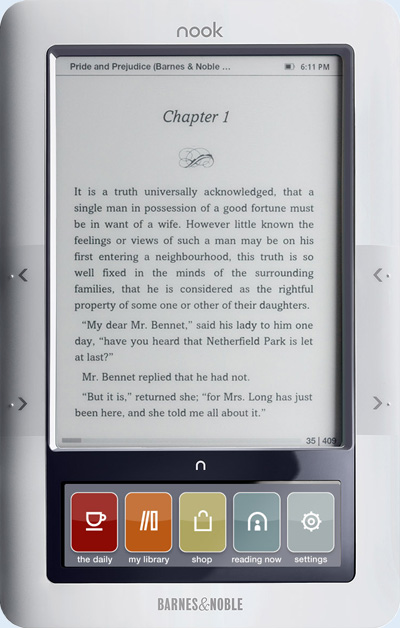 News: There's a new eReader/Tablet from Barnes and Noble called the Nook Color!

The Barnes and Noble Nook is a one of a kind creation: it is the first ebook reader on the market to employ both a traditional 6-inch E Ink screen along with an LCD touchscreen for navigation. Available in the US only, it sells for $199 for the 3G version and $149 for the WiFi-only model.

The Nook was officially unveiled back on October 20th, and was expected to be in stores by December. But the first wave of orders sold out well before December, and continued to remain on backorder until mid February.

Now, the Nook is finally in stock in most stores, or can be ordered from the Barnes and Noble website with free 3-day shipping. To check which stores have them in stock, follow the link above and click on the "Try it in-store" icon on the center-right of the page.

Update: The Nook has had a number of firmware updates since this review was written so make sure to check this updated Nook Review for a more accurate review of the latest features and improvements.

The Barnes and Noble Nook has received its fair share of negative reviews, and if you jump to the second page of this review you might think this is another negative review too, but for the most part it's not.

The Nook has some software issues that need to be worked out, but overall it's an ebook reader designed to read ebooks, and for doing that it does its job—just don't expect to be blown away by it user-interface and features. The hardware and design are good; the software needs to catch up.

The Nook's E Ink display is its strongest point. The contrast is superb. The text is dark and defined, and the background color appears slightly whiter than other ereaders. Pictures are surprisingly detailed with the 16 shades of gray.

As shown in the video, there are 5 adjustable font sizes, and 3 font types. The three font types are Helvetica Neue, Amasis, and Light Classic, the latter two are serif fonts and the first sans serif. The ability to change font type is an advanced feature that many other ereaders don't have.

The Nook comes with free wireless service from AT&T's 3G network, and connects to Barnes and Noble's online ebook store for wireless downloads. It also has built-in Wi-Fi for connecting to your home network or public network, and B&N offers free Wi-Fi at their retail stores.

There are no fees, contracts, or wireless service charges for the 3G coverage; all that is included.

Browsing through the online store with the Nook has it ups and downs. The pages load faster than Sony's Daily Edition, but the search options and filters are much more limited. Categories break down into sub-categories, but there are no sorting options—just relevancy by default. 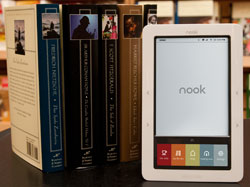 The best way to browse ebooks on the Nook is to choose to show covers on the LCD screen. You can quickly scan through them and the pages automatically turn.

Another plus the Nook has over the Daily Edition is that it can download free public domain titles from Google through the online store.

They can be tricky to find because of the limited search options, but they're available. The downside, however, is that these titles usually suffer from poor formatting. Better versions can usually be found at Project Gutenberg. Or you can buy B&N Classics for $.99.

Hint: To find the list of free titles available for the Nook, simply type in 0.00 into the search box while visiting the online store. This also works on B&N's website under the ebooks tab, and is easier to navigate because there are more advanced search options.

Barnes and Noble boasts a library of over 1 million books, but after a few simple calculations it appears that a more accurate number would be around 117,000, the rest are free and are generally available from multiple sources.

One of the best things about the Nook is that you can purchase ebooks from anywhere that sells ebooks with Adobe DRM, which most ebook stores do—except Amazon and Apple. Check our ebook stores page for a long list of sources for Nook ebooks, and our free ebooks page for the best places to download freebies.

Sign up for a B&N account and you can download free samples of most ebooks before purchasing; this is also a good way to make sure the formatting of a book is acceptable before you buy it.

Another major positive about Barnes and Noble, they have dropped the prices of many of their ebooks considerably since the initial release of the Nook to match Amazon's prices.

In additions to ebooks, there are newspaper and magazine subscriptions available for the Nook, with more being added each week, claims B&N. Periodicals come with a 14-day free trial.

Like Sony, Barnes and Noble has announced that they are transitioning their entire library of ebooks to EPUB format. The Nook also supports PDF and PDB (Palm) formats and works with Adobe Digital Editions, granting access to local libraries' digital collections through use with OverDrive.

Note: B&N uses a different DRM than other EPUB retailers. Ebooks purchased from B&N won't work on any other ebook reader, yet. However, EPUB ebooks purchased elsewhere will work on the Nook.

For image files it supports JPEG, GIF, PNG, and BMPand you can create custom screen savers and home screen wallpaper.

In addition, the Barnes and Noble Nook has a headphone jack, built-in speakers, and supports MP3, but it doesn't have text-to-speech.

One thing that sets the Barnes and Noble Nook apart from other ebook readers is the ability to lend purchased ebooks to friends owning a device (computer, phone, iPod, Nook) with B&N's software installed.

A borrowed book lasts for 14 days and can only be on one device at a time, meaning you can't lend it multiple times at once. And it's important to note that you don't have access to the book while it is loaned to someone else, and you can't re-loan it after you get it back.

A synchronizing feature brings all your content together on all your devices that are set up with B&N's software, so that notes, annotations, and the last page read appear on whichever device you use.