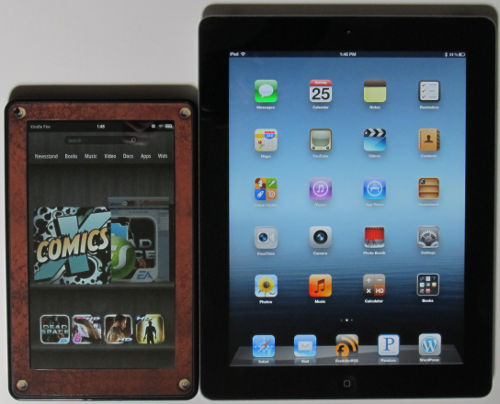 When comparing the Kindle Fire with the iPad 3 there are a number of different aspects to consider. Each tablet shares a lot of the same features, and each offers something the other does not.

The iPad is a lot more expensive so it has more going for it, but not everybody needs the extra features.

When it comes right down to it both tablets can do many of the same things: browse the web, listen to music, watch videos, read ebooks, newspapers, and magazines, play video games, email, use social networks, and a lot more. In fact, many of the same apps are available on both platforms.

Aside from the operating systems, the biggest difference between the two tablets is their size. The Kindle Fire is about half the size of the iPad, although a little thicker. The iPad is more of an all around tablet whereas the Kindle is more designed around ereading, games, music, and videos.

Check the iPad review and Kindle Fire review for more detailed information about each tablet.

When trying to decide between buying the Kindle Fire and iPad 3, more than anything it comes down to how much you want to spend. The iPad is bigger and more capable but it also costs 2.5 to 4 times as much.

In my opinion, the Kindle Fire is more suited for those that primarily want a color ereader with tablet benefits, such as playing video games, web browsing, watching videos, and listening to music.

It's also better if you want to save more money in the long run. Amazon's content seems to be less expensive by my experience, and they give away a paid Android app for free each day. Plus you can get Android apps from other sources, including Google if you choose to root the tablet. Rooting also opens up doors for further goodies like installing alternate versions of Android.

Because of its advanced feature-set and larger size, the iPad is more suited for business and education use than the Kindle Fire. The iPad can be used as a laptop replacement and is better for textbooks and educational apps in general. The iPad fits the role of an entertainment device and a productivity device, whereas the Kindle is more suited for content consumption rather than creation. It probably won't be long before Amazon comes out with their own 10" tablet to better compete with the iPad directly.