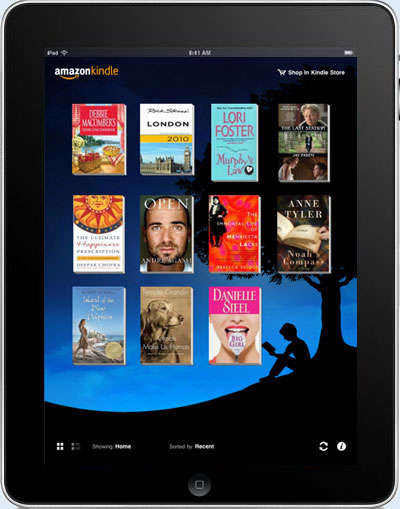 Kindle eBooks On The Apple iPad

With the release of the iPad and Apple's new iBookstore, a lot of so called analysts and experts like to speculate that Apple is now going to dominate the ebook industry the way they have the music industry.

There are a number of holes in that theory, so lets start with the most obvious one: ebook selection.

Amazon currently has over 480,000 ebooks in the Kindle store, a number they have been building on for years.

At launch, the Apple iBookstore was reportedly supposed to have about 60,000 ebooks, with half of them free public domain titles from Project Gutenberg—from my experience there's no where near that many titles available at the moment.

Keep in mind that the iBookstore just launched at the start of April, so it's going to take them time to get a selection built up. I'd say a fair estimate would be a total of 100,000 - 150,000 titles by the end of the year, provided the free public domain ebooks remain at around 30,000.

Secondly, Amazon's ebooks are no longer confined to just the Kindle. They have apps for iPhone, iPad, PC and Mac computers, Blackberry, and others are supposed to be coming soon. As for Apple's iBooks, they can only be viewed on an iPad, nothing else. In fact, you cannot even browse the iBookstore without an iPad to see what the selection and pricing is like.

Another major advantage Amazon has over Apple's ebooks is that they are available to people in over 175 countries, whereas iBooks are US only at this point.

All these factors make you wonder what these analysts are analyzing to already be digging a grave for Amazon and the Kindle in the ebook industry. The iPad is a marvelous machine, but that doesn't mean Apple's iBookstore is going to dominate the ebook market. Quite the contrary. With so many third-party apps available that offer the same ebooks—which can be viewed on multiple devices—I don't see how any informed person would choose to buy ebooks from Apple and be locked into just the iPad.

Buying Amazon's eBooks From The iPad

There are two different ways to buy ebooks and download free samples from Amazon on the iPad. First, you can launch the web browser and navigate to Amazon's site just as you would from a computer, and there's also a link to launch the browser from the Kindle iPad home screen, which closes the Kindle app.

Sign in the first time. Click buy on the ebook you want, and you're good to go. The book will automatically show up the next time you open Kindle for iPad, provided you have internet access, of course.

I discovered another way to get ebooks from Amazon without leaving the app. Go into the settings menu of the Kindle iPad home screen and choose "Learn about Kindle" or "Help". Doing this launches a browser within the app that directs to Amazon's website. From there you can browse ebooks and purchase without leaving the Kindle app. 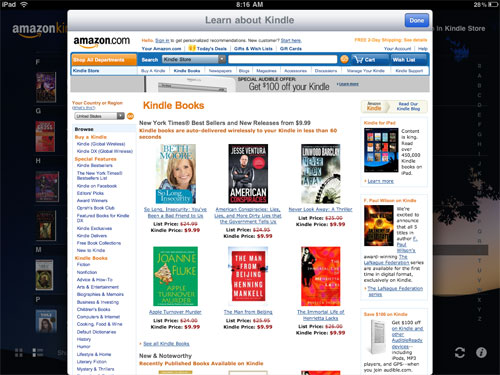 The Kindle iPad app has 5 different font sizes to choose from, and one font type. The smallest and largest fonts are displayed below, the larger being smaller than expected. 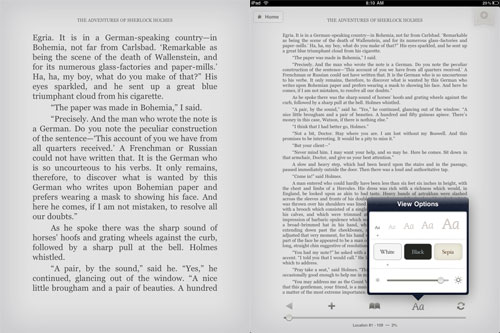 The Kindle app allows for changing the background color and adjusting the brightness to minimize eye strain. There's the standard black and white, and then the opposite white on black. The third option is sepia, which features a light tan background with dark brown text. The Sepia setting is easier on the eyes because the background isn't as bright as the white setting. 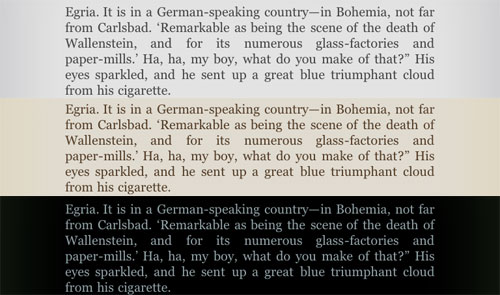 Press on a word or double tap it to bring up the options bar. From here you can add notes using the keyboard or highlight a word or selection by moving the blue circles to expand the highlighted portion. Doing so creates a bookmark, or you can bookmark by tapping the + sign.

What makes this really cool is that highlights, notes, bookmarks, and last page read automatically sync to all your other Kindle devices using Amazon's Whispersync. Make a highlight using the iPad in a book and you can open Kindle for PC and your highlight appears there too. 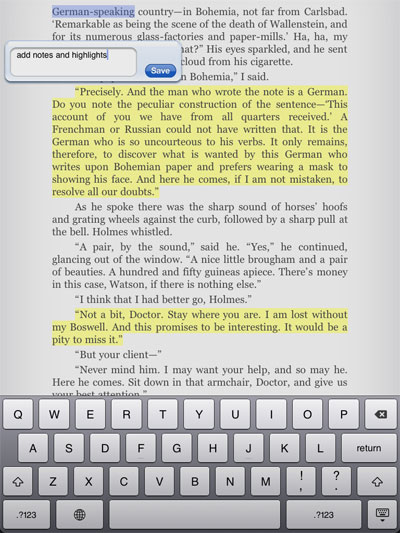 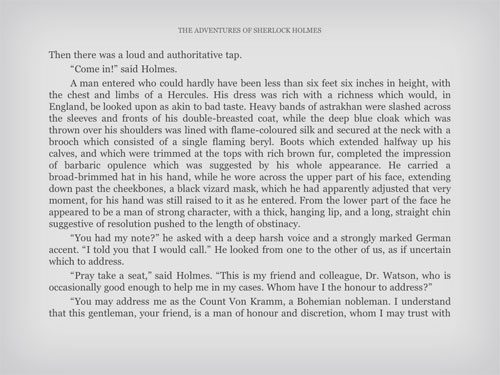 The image at the very top of this page is the default layout for Kindle iPad, and there's also a list view as well. 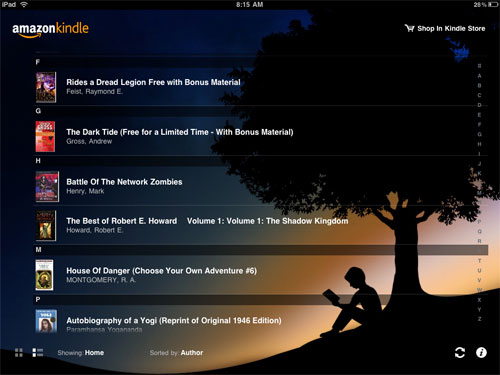 Other features not mentioned above include table of contents (if the book has one), bookmark menu, jump to specific page, and there's a handy go-back button and a sync button. In the home settings menu you can turn on and off page turn animations. Oh, and you can zoom and out of pictures by pinching them.

Amazon's website says that search and instant dictionary lookup are coming to the iPad app soon. They are also supposed to be adding folder support to the Kindles anytime, not sure it they will add that feature to the apps or not, but logic suspects they will.