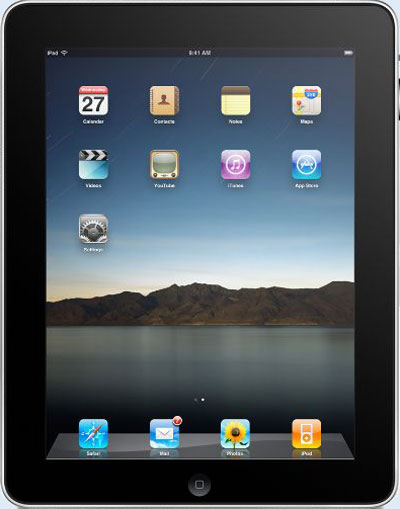 Since the Apple iPad has so many different features and apps, I've decided to do this review a bit differently.

This first page covers all the base features and apps for the iPad, and each subsequent page has multiple screenshots and detailed reviews of various ebook reading applications, since that's the main focus of this website. Also, make sure to check the iBooks page for info about the iPad as an ebook reader in general.

The first thing you'll notice is that the iPad is very slick, both in appearance and physically. Holding it with one hand is doable but it's a bit on the heavy side and could easily slip out of your hand if you're not careful. I usually find myself holding it with one hand and leaning against my leg or something else, because you really need a free hand to interact with the touchscreen.

Holding it one-handed in landscape mode feels more secure, as the weight is more evenly distributed this way. Holding it with two hands is very comfortable for reading and such, and your thumbs can easily turn pages.

It's amazing how cool the iPad stays when using it for several hours at a time, even when streaming videos and running high-energy apps. The back gets slightly warm, not uncomfortable at all.

The iPad's 9.7-inch LED multi-touch screen is by far its strongest point. Colors are bright and vibrant, and blacks are dark and don't have that weird color that most LCD screens have. The screen is surprisingly clear at most angles (178° viewing angle according to Apple's website), much better than my LCD computer and TV screens. HD videos and photos look spectacular.

Interacting with the screen is intuitive and easy to learn if you haven't used an Apple touchscreen before, which I haven't. Sometimes on-screen tasks are unclear so you have to tap on things to experiment; I'm sure I'm unaware of some nifty shortcuts. One I've already learned is that the iPad can take screenshots if you press the power button and the home button at the same time. See . . . 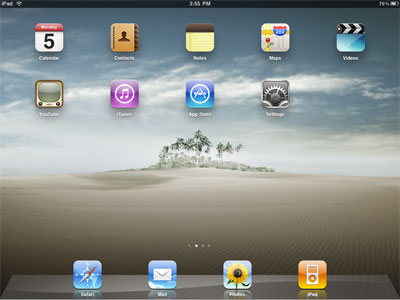 The screen isn't all that great in direct sunlight outdoors, but it can get the job done—it's better than my laptop. Reflections and fingerprints are more noticeable in brighter light or when the background color is dark, but both are pretty much unnoticeable indoors with the brightness turned up. When you turn the brightness down to a lower setting reflections and fingerprints are more apparent. Overall I'd say glare is not much of an issue indoors.

The iPad's long battery life is what makes it so versatile as a portable device. Apple claims the battery will last for up to 10 hours of constant video use, and that seems about right by my experience. Some reviewers have gotten upwards of 12 hours of video playback. Most laptops and netbooks only get 2-4 hours, so that's a major plus.

The iPad's built-in Safari web browser works quite well and is relatively fast, most sites load in just a few seconds using Wi-Fi. You can have up to 9 windows open at one time. There's a history and bookmarks menu, along with a search box for Google or Yahoo.

Perusing the web with a smaller screen works better than you'd think. Double tap a column to zoom in for a closer look, or you can custom zoom by moving two fingers outward at once. Hold down on a hyperlink at a box pops up showing the link's url along with open and copying options.

The biggest drawback with the web browser is that there's no support for Flash, so browsing is somewhat half-assed. You won't be able to watch videos from Hulu or anywhere else that uses Flash for videos. I'm sure some apps will come to the rescue; there's already one for ABC where you can watch some of their TV shows for free. And there's Netflix subscriptions, of course.

The other downer is that there's not much for bells and whistles and customization with the browser. It'll get the job done but for someone who's used to all the add-ons for Firefox it's quite a big step back. There's no reason for the browser to be so basic, the iPad could probably handle a full-fledged browser just fine, it's not a cellphone.

All models have Wi-Fi (802.11 a/b/g/n) and Bluetooth 2.1 + EDR technology. But the 3G models require monthly data plans that are activated via the iPad. Offered through AT&T, these plans are pre-paid with no contracts and can be canceled at any time. Additionally, all 3G models are unlocked and use GSM micro-SIMS to permit possible use with other wireless carriers.

Data Plan Option One: 250 MB per month for $14.99. This may sound like a fair amount of data, but anything more than checking email and occasional web-browsing will easily exceed this.

Also with these plans, AT&T is throwing in free Wi-Fi at hotspots.

I was going to put together a general review of the iPad, but PC Mag did such a great job of it that I decided to embed their video and focus on doing videos for individual ebook apps instead.

One of my favorite features on the new Apple iPad is the Maps app that comes already installed. The touchscreen makes finding what your looking for quick and easy, and there's all kinds of cool tricks the app can do.

I've been using Google Earth for years and am quite familiar with the overhead satellite views, but I never knew that they had taken it to such an extreme level. Ever wonder what the scenery looks like off the cost of Italy? Well, here it is. Viewable in 360° on the iPad. Thanks to the street view of the Maps app. 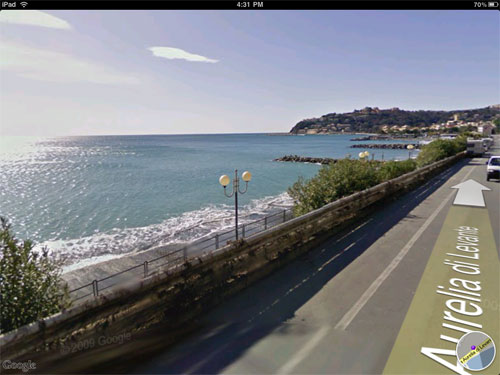 See the arrow in the picture? Tap on it and the car advances along the road, forward or back. And you can view the street level like this in several countries. In fact, there's a good chance there's a view of the front of your house if you live along the street. My house is off a dirt road and it's even viewable. Amazing, and kind of scary too.

Drop a pin on a location and then type in hotels, gas, or restaurant, etc, and you'll get list of places in the general area. The iPad has GPS too so that you can get directions on the fly, along with an overlay that shows traffic density.

Apple iPad: It's Not All Roses

Overall the Apple iPad is an innovative new gadget that's a lot of fun to use, and I can't wait to see what ingenious new apps come out for it in the next few months. If you have the money I'd definitely recommend getting one, but there are a few things about it that really get under my skin.

Aside from the lack of Flash support mentioned above, my biggest problem with the iPad is that it is so buy-centric. The $499 - $829 for purchasing the device is just the beginning.

First, it doesn't come with any accessories save a 30-pin connector and AC charger. Because of the slick exterior and dust-collecting, delicate screen, a good cover is essential, so consider another $39 into the equation.

The 2 year Apple protection plan for the iPad is $99, probably a good idea to have considering one slip may send it to its grave.

The 3G models are great for when your away from Wi-Fi hotspots, but 3G is going to add on another $15-$30 a month.

The strangest thing about the iPad is that a computer and iTunes account is absolutely required to set it up. One of the things Amazon boasts about the Kindle is that no computer is required. And it's odd that the iPad can't stand alone when it can do many of the things a computer can. I don't understand why they couldn't have made the iTunes setup process part of the iPad's initial configuration for those you don't already have an account.

Another annoyance is that you are forced to use the iTunes software. For the most part, all your files have to be synced with iTunes in order to transfer them onto the device. You can't just plug it into your computer and drag and drop files like you would most other devices. A middle man is required, and his name is iTunes. 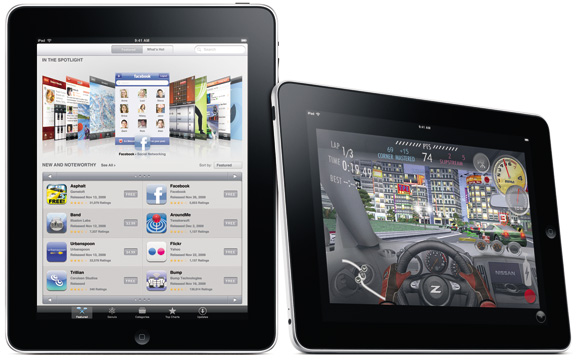 There are six different iPad models to choose from at Apple.com, with options for different levels of memory and 3G wireless. All have Wi-Fi.

Regarding an international release date: iPad will be available in both Wi-Fi and Wi-Fi + 3G models in late May in Australia, Canada, France, Germany, Italy, Japan, Spain, Switzerland and the UK. International pricing will be announced in May. iPad will ship in additional countries later this year.