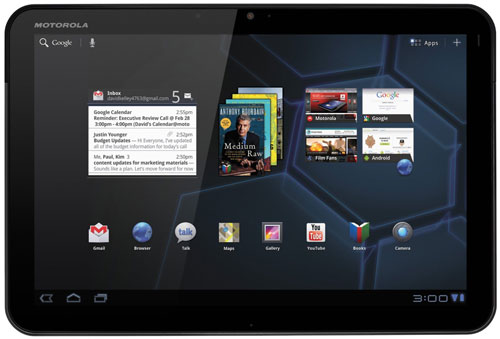 The Motorola Xoom is the first tablet to come with Google's new tablet-specific operating system, Android 3.1 Honeycomb. There are 3G/4G wireless options available for the Xoom through AT&T and Verizon, and there is a WiFi-only model as well. There's also word of a less expensive 16GB model in the works.

Like most new Honeycomb tablets, the Xoom runs on a 1GHz dual-core NVIDIA Tegra 2 processor. Simply put, that means it's fast. 3D games, 1080p HD video, scrolling, jumping between multiple apps are all very smooth, with just an occasional lag in certain instances. For memory it has 1GB of DDR2 RAM, 32GB of internal storage, and a microSD card slot for cards up to 32GB, although not active at launch.

The Motorola Xoom features a 10.1" display with a resolution of 1280 x 800. It comes with Wi-Fi, Bluetooth, and optional 3G wireless that will be upgradable to 4G with Verizon.

It has a front-facing 2 megapixel camera for video chat and a 5 megapixel rear-facing camera with LED flash for photos and capturing 720p video.

Other features include two built-in speakers on the back, headphone jack, mini-USB port and mini-HDMI port, Adobe Flash support, built-in gyroscope, barometer, e-compass, and accelerometer. Battery life is about 8-10 hours per charge. The device weighs in at approximately 25 ounces and measures 9.8 x 6.6 x 0.5 inches.

Motorola's hardware is nice, but what stands out the most about the Xoom is the Honeycomb operating system. In addition to the widgets, customizable homescreens, and multitasking, it comes with all of Google's apps for eBooks, video and voice chat, 3D maps, email, calendar, and a lot more via the Android Market. Honeycomb is better witnessed than talked about so take a look...

The Motorola Xoom as an eReader

While a high-end tablet like the Motorola Xoom makes an expensive ereader, it is one of the most advanced electronic readers given the dozens of reading apps, news apps, RSS readers, PDF applications, comic viewers, web browsers, and email clients available from the Android Market.

With an aspect ration of 16:10, the Motorola Xoom is more suited for landscape mode, but portrait mode is just wide enough to be useful as well, at about 1/2" wider than the Notion Ink Adam's screen and 3/8" less than the iPad's.

Overall the screen quality is really good, colors are bright and text is nicely defined with the higher resolution. The capacitive multi-touch screen responds superbly, although prone to fingerprints and glare. Compared to the iPad, text is crisper and less pixelated because of the greater pixel density, but the screen and colors aren't quite as bright, and the iPad's touchscreen responsiveness is slightly better.

Reading Outside in Bright Light

The Motorola Xoom has a highly-reflective LCD screen, which makes reading outside in bright light not very pleasant. It's really not different than any other LCD screen. Fingerprints, reflections, and screen washout are much more of a problem in bright lighting conditions. I've found the Xoom's screen looks fine in a car or sitting on a porch, just as long as the screen isn't in direct sunlight.

Personally, I find the Motorola Xoom surprisingly comfortable to hold in both portrait and landscape orientation, more comfortable than the iPad 2, despite weighing more. Something about the weight distribution and how the edges are rounded really make the Xoom fit comfortably in my hands. I have very large hands, however, so I don't know how that will affect your experience. I don't have any issues with fatigue holding the Xoom for extended periods of time. One-handed is tiring after awhile but is doable.

The Google eBooks app comes pre-installed on the Motorola Xoom. There aren't any periodical subscriptions available through Google yet, but there are 3rd party news apps and other e-reading apps with subscriptions.

With the Google eBooks app you can read ePub and PDF ebooks purchased through Google, as well as free ebooks. The main crux with the app, however, is that it doesn't allow you to import your own ebooks to it, so it only works for ebooks from Google, even though Google's ebooks work on pretty much any e-reading device.

There's a table of contents, brightness adjuster, option to save the ebook to read offline, and an option to view the scanned copy if available. You can read in portrait and landscape modes, landscape view uses two columns. It uses animated page turns and double-tap or pinch to zoom. No dictionary, highlighting, or notes unfortunately.

Honeycomb is so new that there isn't a great deal of tablet-specific apps available yet but there are a few. CNN and USA Today both have tablet apps, which include widgets for the Honeycomb homescreen that are quite nice. The CNN app has a nice layout. The USA Today app has potential if not for the giant annoying ad at the bottom of the screen that never goes away.

There's also a tablet app for the New York Times that looks like a stretched version of the phone app. What's strange is that the NYT paywall doesn't seem to affect it, all the articles and sections work without a problem whereas the iPad app only lets you read the top news stories. Makes no sense.

Although not optimized for tablets, most of the phone news apps will work fine as well, they will just stretch to the larger tablet's screen.

There are a bunch of RSS news readers, including Google Reader. One of the tablet-specific RSS apps is Pulse. Pulse has a nice layout, widgets, and provides a good reading experience. What's cool is that you can sign into your Google account to import all your feeds from Google Reader.

The Android Market is loaded with different kinds of free and paid ebook reader apps. All the major ebook stores have free apps: Kindle, Sony, Nook, Kobo, and Borders. Some of the other popular ereading apps include Aldiko, FBReader, Cool Reader, Moon+Reader, and OverDrive for free library ebooks.

Aside from ebook reading apps there are other e-reading apps too. There is an app for offline Wikipedia, numerous Bibles and religious texts, children's books, survival guides, dictionaries, thesauri, etc.

Stay tuned to the app section of The eBook Reader Blog for individual reviews of all the best Android e-reading apps.

PDF functionality all depends on the app you are using, but viewing PDFs among them is going to be about the same given the Xoom's screen dimensions. Below are a few pictures of some PDFs in portrait and landscape mode. There's a paid app called RepliGo that seems to be the most popular for advanced PDF use, adding notes, highlights, etc.

Given the Motorola Xoom's large screen size, comics and manga look fantastic. The text balloons are easily readable. There are several comic and manga apps, one of the best is Comixology.