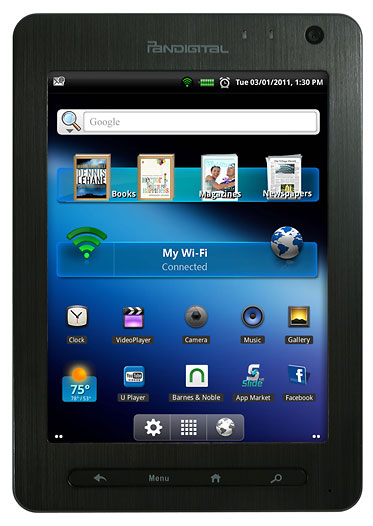 The Pandigital Nova is a definite step up from last year's models and is a slight step ahead of the Planet and Star because it comes with twice as much memory and runs a newer version of Android. Otherwise they are very similar, with just a few subtle differences (I'll post a comparison review for them soon).

The Pandigital Nova includes several hardware and software upgrades over last year's models. First off, it uses what is called an ActiveTouch screen, which is a resistive screen that supports multi-touch. It works surprisingly well and is a definite improvement. It still isn't quite as nice as capacitive screens because it requires slightly more pressure, but most people won't notice the difference.

Aside from the touchscreen, the screen quality and technology is the same as before. It uses a 800 x 600 resolution TFT LCD screen that measures 7-inches diagonally.

For memory, the Pandigital Nova comes with 4GB internal, with 512 RAM. It has an upgraded 800MHz processor that is markedly faster than the Novel's, most notably it can play video without any lag (more on that in the video section of the review).

Another change with the Nova, it has hardware buttons for Home, Menu, Back, and Search, which all have a blue backlight when pressed. When reading with the built-in Barnes and Noble app, the Back and Search buttons act as page turning buttons. The buttons are inset slightly and feel somewhat spongy, and sometimes require two presses to activate. Still, I like them better than having to use the onscreen buttons that last year's models had.

Other hardware features include front and rear facing cameras, a micro HDMI port, microSD card slot, built in speaker, mic, headphone jack, and it has a mini USB port with hosting capabilities via an adaptor (not included) for connecting peripherals like a keyboard and mouse.

The Nova runs Android 2.3.4 and is open to install third party apps. It does not come with Android Market access, although you can add it by rooting the Nova and adding Google apps. Instead it comes pre-installed with the GetJar appstore. Another option is to install Amazon's appstore; it works well and you can get a free paid app each day.

As far as Adobe Flash support goes, the Pandigital Nova comes with a flyer that says there will be a firmware update in October to add full Adobe Flash support. Impatient, I tried sideloading several different version of Flash onto the Nova but none would work very well.

Pandigital added some new icons, a reading widget, and a startup wizard for getting started with the Nova—all intended to make learning how to use the device easier for beginners. There's a very thorough user guide included in the library too. Learning how to use an Android device at first does take some time. Here's a tutorial for installing apps.

The Pandigital Nova as an eReader

Like its predecessors, the Pandigital Nova ties in with Barnes and Noble for ebooks and digital newspapers and magazines. It has a specialized ereading app that is different from the typical Nook for Android app, which can also be installed and probably should because it is better anyway. A wide variety of other ereading apps can be installed as well, including Kindle, Kobo, Aldiko, OverDrive for free library ebooks, FBReader, and EZPDF Reader, to name just a few. 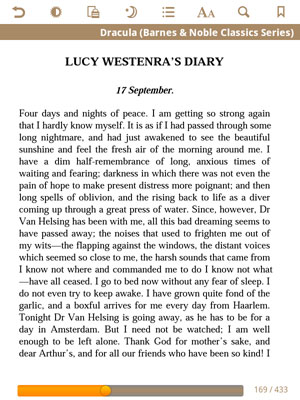 The Nova's built-in app has a fair amount of features and supports EPUB and PDF formats (yes, sideloading too), but what I don't like is that it is slow to load and has a row of icons arranged along the top of the screen at all times when reading.

On the positive side, the app offers bookmarking, highlighting, adding notes, accessing a built-in dictionary, TOC, search, there are five difference font sizes, a brightness adjuster, and portrait and landscape modes. It also has night mode—black background with white text.

You can either swipe or tap the screen to turn pages or use the search and back buttons. The only problem with using the buttons is that they light up whenever pressed, and then go out when you're partway down the page, then light up again when you turn the page . . . gets kind of distracting.

Pandigital created a widget for the B&N app that you can add to the homescreen. It's a quick launch that shows your recently read ebooks and periodicals. Simple but nice.

The Pandigital Nova's B&N app can display PDF files but does so quite horribly. It does not show them in their regular layout, instead it re-flows everything, and even on the smallest font size the text is very large. This works okay for text-based PDFs, but anything with complex formatting gets butchered, as usual with re-flow. All the features listed above for ebooks work with PDFs.

The Pandigital Nova also comes with an app called OfficeSuite. It works better for displaying PDFs than the B&N app. It shows PDFs in their default layout, and you can zoom in and out. Unfortunately pinch zooming doesn't work so you have to use an onscreen icon, same goes for turning pages. The app is very basic, it doesn't even support table of contents—you can jump to a specific page and zoom in and that's about it for features. The app is slow to load pages and doesn't even save what page you were on, so it's pretty useless for PDFs.

Fortunately there are better options for PDFs via Android apps, and plenty of them. I use EZPDF Reader; it works exceptional on the Nova. Aldiko works okay too for a free basic PDF app since pinch zooming works.

In addition to ebooks, the Pandigital Nova can display digital newspapers and magazines from Barnes and Noble (obviously it supports news apps and periodicals from other sources as well). Most periodicals will work on the Nova, but not all. I couldn't get the National Geographic to work, for instance. It must only work for magazines with a newspaper-like layout.

Newspapers and magazines have all the same features and functions as ebooks with the built-in app. Mostly you use the table of contents to navigate between sections; there are also onscreen links for jumping between articles.

Like any Android tablet, the Pandigital Nova comes with the Android Music Player pre-installed. Officially it supports MP3, WAV, and AAC audio formats. Obviously there are other music apps too, my personal favorite is Pandora internet radio, and the Android app for that works well on the Nova.

The Nova has a built in speaker, but it is located on the back so it gets muffled easy and doesn't have very good sound quality to begin with. Luckily the Nova has a headphone jack to compensate.

For videos, the Nova's built-in video player supports MPEG4 and FLV formats. The Nova plays video quite well. Last year's models could not handle playing video smoothly so it's nice to see the Nova can. And since it has a micro HDMI port, you can connect the Nova to a TV or monitor. This takes some getting used to at first, but works pretty well, and you can typically pickup an HDMI cable with a micro connector for less than $4 from Amazon.

Once you connect to a TV, there's an app called HDMI Switch that you open to switch the display to the TV. This turns the Nova's screen black and you use it as a trackpad for a mouse on the TV's screen. You have to orientate the Nova in the right direction or the mouse pointer is hard to control. Then you use the search button to make selections.

Overall the HDMI out works pretty well. The only complaint I have is that the micro HDMI connector is finicky. Barely touch it and the connection goes out. Also, you have to have the volume turned on to transfer sound to the TV, but sound still comes out to the Nova's speaker.

As mentioned earlier in the review, the Pandigital Nova doesn't come with Adobe Flash support yet. It comes with a flyer that says a firmware update will come along in October to add full Adobe Flash support. I tried sideloading a few different Flash apks and none would work.

I installed the NetFlix app and it kind of works. Video plays smoothly, the only problem is that I've been having troubles with the sound syncing up, which is strange because it doesn't do that on the Pandigital Planet. The sound is about 1 second off of the video most the time, just enough to be annoying.

The Pandigital Nova comes with two cameras. One on the front and one on the back. Unless you like video chatting, I don't really see the point of cameras on a tablet. And there's no flash so obviously you need good lighting. The front camera is VGA and the rear is a 1.3MP camera. It won't be replacing your camera or camcorder anytime soon.

It uses the Android camera app so there are various settings you can apply. For videos, there are options for setting the quality, white balance, and color effect. There is no zoom setting for videos. For camera settings there is a zoom dial for 1x, 2x, and 3x. And you can adjust white balance and exposure settings.

When it comes to games, the Pandigital Nova is a definite step up from the Pandigital Novels of last year. It has a newer processor so it can handle games better. Angry birds works great, and Plants vs Zombies too. 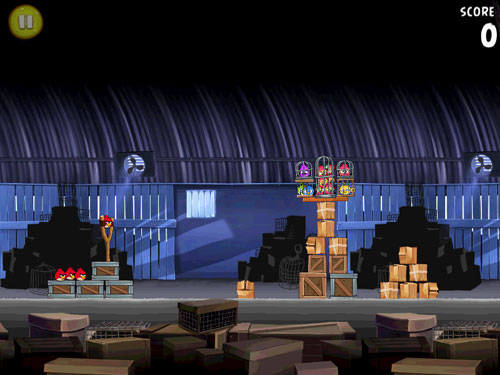 But not all games work well for some reason. Some seem to run in slight slow motion. Pac Man, for instance, is a little on the slow side. My Paper Plane 2 is a little slower than normal too, and worse, the plane won't steer up or down correctly because there's some issue with it. However, Doodle Jump works fine—no issues with the accelerometer on it.

It comes with a notes app, dictionary, and ES file explorer too. There's also an app installer as well as the GetJar appstore. There's a weather widget, YouTube player, OfficeSuite for office files, search, the HDMI switch app, and of course the Barnes and Noble ereading app and InTouch news app.

The Pandigital Nova is a utilitarian tablet. It's not sleek. It's not pretty. It has a truly budget-esque creaky plastic exterior, but feels pretty sturdy overall. Given all the features and cheap price, the Pandigital Nova is a pretty safe purchase if you don't want to spend over $180. It's not quite as nice as a Nook Color, but for about $70 less it can do more than a Nook Color because it has cameras, an HMDI port, and an open Android OS out of the box, plus it has an Android Market hack for those willing.