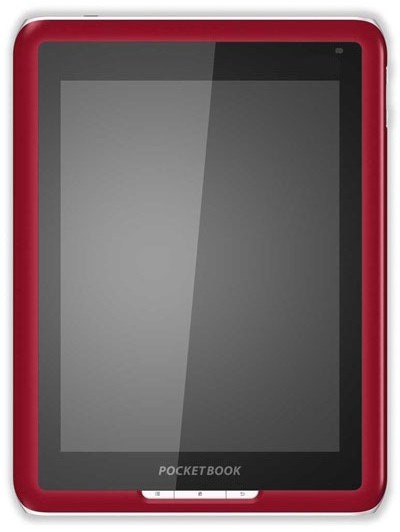 With its 7-inch touchscreen, the PocketBook IQ is both a color ebook reader and a tablet. It has PocketBook's software for ereading and downloading ebooks from their ebook store, Bookland.net, as well as the ability to install 3rd party apps, including the Kindle, Kobo, Aldiko, Borders, and a whole plethora of other apps thanks to the Android operating system.

For those of you familiar with the white Pandigital Novel and Cruz Reader, the PocketBook IQ is similar to those devices from a hardware perspective, but there are some noticeable differences between them. The IQ has 3 buttons below the display in addition to the volume buttons on the side, so navigation is a lot easier and more fitting for using Android apps. Additionally, the IQ is made out of metal instead of plastic.

There's a lot to learn when first getting started with Android, so this ended up being as much of a review about Android apps as it is the IQ specifically. If you've got another tablet in mind, jump down to the sections about installing apps, browsers, etc.

Since the PocketBook IQ can install apps, it isn't limited to just e-reading. There are apps for just about everything: you can send and receive email, use it as a calendar and day planner, browse the internet, download and send files, use Google Maps, get news updates, setup slideshows, play videos, music, etc.

It comes with 2GB of memory, 256MB RAM, and has an SD card slot for cards up to 32GB. There's an orientation sensor, mini USB port, two speakers, and headphone jack. A battery charge lasts about 5-8 hours, depending on how it's used. 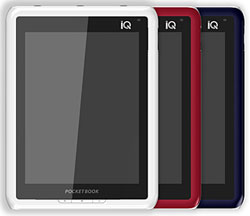 The PocketBook IQ has a 7" TFT LCD screen with a resolution of 800 x 600, which is quite different than the 7" screens that are 800 x 480 like the Augen eReader. Personally, I find the 800 x 600 screens much better for reading and web browsing.

For the most part the resistive touchscreen is accurate and responsive. Tapping selections, using the keyboard, hitting tiny hyperlinks in the browser all work well. Swiping and scrolling isn't as smooth as with a capacitive screen, but works well enough not to be too annoying. Some reading apps and browsers allow you to use the volume buttons to turn pages, so that helps.

Out of the box the IQ comes with a AC charger, USB cable, slip cover, and 2 year warranty. There are three colors varieties, blue, white, and red.

Installing apps might sound confusing at first, but once you learn where to find them, installing and uninstalling them takes just a few seconds.

There are few things to know. First, you're going to need an SD memory card to install new apps (some are already pre-installed). Second, the IQ comes with about 50MB of space for 3rd-party apps—not a lot, but enough for an average of 10-20 apps, depending on their size (many are 3MB or less, some are much larger). To install them all you have to do is select the app's APK file using the File Manager if they don't automatically ask to be installed when downloaded.

The major limitation with apps it that Google doesn't yet allow tablets like the IQ to have direct access to the Android Market to access all of them because Android and most Android apps are designed for cellphones with small screens and the IQ doesn't have the requisite hardware that some apps require—such as a camera.

This means that you have to either download apps from other more limited Android app markets—such as SlideMe which comes pre-installed on the IQ—find the app's APK file on the internet to download directly (which can be surprisingly difficult), or install an Android Emulator on your computer, set it up to get access to the Android Market, download apps with it, and then extract them to load onto the IQ or other Android-powered device.

The last option is the best way to go if you want access to the widest selection of updated apps, but does take some technical work to setup. Follow the directions outlined in the comments of this blog post. Then make sure to read this comment to learn how to extract the APK files. If you just want some reading apps, you can download a ZIP package that I have set up on this page. Which brings us to . . .

The PocketBook IQ as an eReader

If you don't mind reading on an LCD screen, the PocketBook IQ is an excellent ereader. Not only does it come with PocketBook's ereading app, it has the ability to install several Android ereading apps and news apps.

Here's a list of the reading apps that I've tested on the IQ, and how they perform: Android Reading Apps Review. The only reading app I have not been able to get to work is the the Nook app—tried 4 different versions and none would open. There's a huge problem with the Nook app anyway, it's 17MB, double the size of the Google Maps app and 4-10 times larger than most other ereading apps.

As for PocketBook's ereading app, it has some good features but is still a work in progress. It won't support Adobe DRM until the firmware gets updated in Q1 2011 and there's not a lot of settings to customize layout yet.

The PocketBook app has the following features: dictionary, notes, table of contents, jump to page, search, night reading mode, and you can turn pages with the volume buttons, by tapping the screen, and by swiping. The font size is adjustable from 12 to 36.

For PDFs the same features apply, minus search and TOC, and it has zoom instead of increase font size. Once zoomed you pan around the page; and zoom remains when turning pages. Notes are added to an app called ViNotes. You can write freehand notes on top the PDF. Overall the program still needs work but is better than any other free Android PDF apps.

The PocketBook IQ makes a fine internet tablet thanks to some really cool apps. The stock Android browser that it comes with is okay, but I've found the Dolphin HD browser and Opera Mini browsers are much better.

You can download both of them through the SlideMe app that comes on the IQ, but I found I don't like those versions as much. I'd suggest trying the Dolphin HD and Opera Mini available at Android Freeware. If you visit those links with the IQ's browser you can download the app's APK files directly, otherwise just copy them to the IQ's SD card and then open them using the File Manager.

The Opera Mini browser has a cool one-tap zoom that works well for reading articles, and the Dolphin HD browser has screen gestures and can scroll using the volume buttons. Both have tabs, bookmarks, forward and back buttons, can download various file types, copy text and images, search on page, history—all the things you'd expect from a web browser.

For email, you can either use a browser or use the pre-installed Android eMail app, or install another app. Once you set up your email account through the app, it will notify you when you get new emails. You can send and receive emails through the app. You may need to use the browser to download and send attachments, as there are limitations with the app.

The PocketBook IQ comes installed with apps for music, video, and pictures. Or you can install a variety of free apps, including YouTube. The IQ does not play Flash video since it runs Android 2.0.

Like most tablets and ereaders, the IQ's speaker aren't particularly loud and don't have much bass. The speakers are on the bottom edge and not the back so that helps project the sound some, but headphones are going to be needed unless the room is relatively quite for videos, music is quite a bit louder.

The stock music app has playlists, shuffle, and can run in the background while working with other apps. Haven't used it much because I've been using RealPlayer and Pandora instead, both of which can play in the background as well. Both can be downloaded via Android Freeware if you don't have the Android Emulator set up.

The stock video player supports MP4 videos. It also lists AVI and 3GP as supported formats but I couldn't get any AVI's to work—probably user error. I tested various MP4s and all worked but were just a little laggy, like they were running a few frames per second short. Some YouTube videos are laggy too, and others run smoothly. (Here's a YouTube app if you're having trouble finding one that works.)

The PocketBook IQ is both an ereader and a tablet. With the ability to download and display ebooks from most major ebook stores, it is more versatile than a regular ebook reader, not to mention all the free news apps, web browsers, and rss readers that deliver a complete reading experience.

The main question comes down to the LCD screen and battery life. It's really something you have to try to find out for yourself to see if reading on a backlit, reflective screen is something for you. Like most tablets and laptops, it's definitely more suited for indoor use. Outside and in bright light the display is hard to read and reflective.

For those that don't need video, color, don't want a reflective screen, and want to be able to read in direct sunlight, then an E Ink ereader with a paper-like display and 2-4 week battery life is probably going to be a better choice.

In the end, I prefer reading fiction on an E Ink ebook reader best, but I decided I liked the IQ enough to keep it for supplemental reading and for reading on the internet, news apps, email, etc. Android is a growing platform that is open source with a tremendous amount of upside, and the IQ makes a good inexpensive starter tablet to explore its makings. 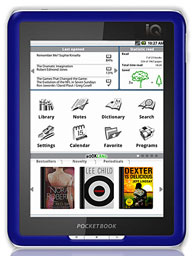