PocketBook is brand of ebook reader that isn't widely known in the United States yet, despite being one of the largest ebook reader manufacturers in the world. They were founded in the Ukraine in 2007 and primarily focused on the European market until their recent expansion into more than 20 countries worldwide, including the US, Germany, Russia, China, and Middle East.

PocketBook has several ebook readers and tablets on the market. Their E Ink ereaders come with standard 6-inch screens as well as 5-inch and large 9.7-inch screens. Their tablets are Android-powered and come a couple different sizes.

Visit the PocketBook Section of the The eBook Reader Blog for all the latest news. 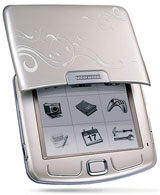 The PocketBook 360 Plus is a versatile, compact 5-inch ebook reader with a unique design that incorporates a hard shell cover to keep the screen protected, and snaps on the back while reading.

Available in Ivory and Black, the PocketBook 360 Plus has WiFi, 2GB of memory, a microSD card slot, accelerometer, and is one of the smallest and lightest ebook readers ever made. 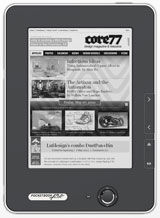 The PocketBook 602 and 603 are the latest 6-inch ebook readers from PocketBook. Both devices are very similar, the main difference being the PocketBook 603 is the premium model and comes with a Wacom touchscreen and 3G wireless.

Both come with WiFi, Bluetooth, and have note-taking, highlighting, and bookmarking features. There are widgets to customize the homescreen, an MP3 player, and a built-in ebook store to download new and free ebooks. 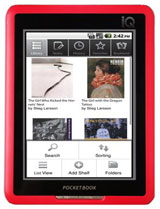 The PocketBook IQ has a 7-inch LCD touchscreen and is the first color ereader released by PocketBook. It is widely available in many parts of the world.

The IQ also doubles as a tablet, running Google's Android operating system. It can browse the web, run Android apps, play videos and music, and of course it has PocketBook's software for reading ebooks in various formats. 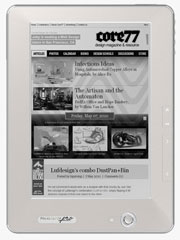 The PocketBook 902 and 903 have large 9.7-inch screens, the same size as the Kindle DX, and are the first real competitors to challenge the DX.

The 902 is the base model and the PocketBook 903 comes with upgraded features: a Wacom touchscreen and 3G wireless.

The larger screen size is more suited for PDFs, textbooks, periodicals, comics, and similar content that is difficult to display properly on a smaller 6-inch ereader. 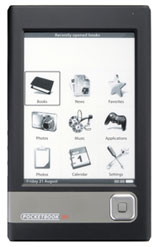 The PB 301 is an example of the most rebranded ebook reader on the market, the Netronix EB-600, which has been out since early 2007. The 301 Plus is a newer version of that device.

PocketBook still makes and sells this device even though it is vastly outdated. 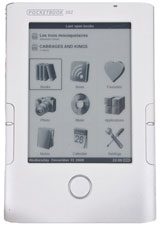 Released in early 2010, the PocketBook 302 features a touchscreen that works with both fingers and a stylus.

It has a 6-inch E Ink Vizplex display, comes with Wi-Fi and Bluetooth, and has a web browser for connecting to the web and downloading ebooks.

The unit comes in two different colors, black and white, and the standard package comes with a leather cover and USB cable.

Unfortunately this particular model was discontinued after a very short run.