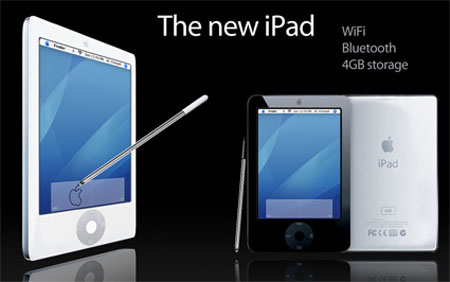 There's this interesting article on koreaittimes.com about a company in Shenzhen, one of the fastest growing cities in the world located in China, set to release a counterfeit version of the Apple iPad on the same day as the official release in the United States.

According to the article there are some 400 counterfeit electronics companies in Shenzhen City that routinely counterfeit popular electronics like netbooks, tablet PCs, and cellphones.

The counterfeit iPad sells for about $290 USD (2000 yuan). A closer look at the picture reveals that it looks nothing like the original. It has a D-pad, a stylus, and the screen size appears much smaller with a different set of dimensions.

The picture also shows that the memory is only 4GB, much less than the 16GB-64GB of the real iPad.

Of course, this is just the first of many counterfeit iPads to come out of China. The article also mentions a second company in Beijing that has "iPads" available for pre-order for $730 USD (4980 yuan).