The Ectaco jetBook has been on the market for 2 years now, and is starting to become more popular and widely available. It's also one of the lowest-priced ebook readers starting at around $99. The Aluratek Libre eBook Reader Pro is very similar to the jetBook. Both are originally based on an ebook reader out of China called Dr. Yi.

The thing about jetBook ebook readers is the screen technology isn't the same as mainstream ebook readers like the Kindle, Nook, and Sony. Instead, the jetBooks have a non-backlit, grayscale LCD display.

There are currently two versions of the Ectaco jetBooks available, the original jetBook and the jetBook Lite. Both now support Adobe DRM. There is a third reader in the works, the jetBook Mini, that will likely be released sometime in August. 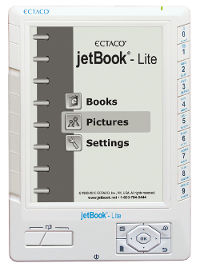 The jetBook Lite has recently been selling for as low as $99 from Amazon and JR.com. It can also be found in some retail stores like Bed Bath and Beyond and Radio Shack. 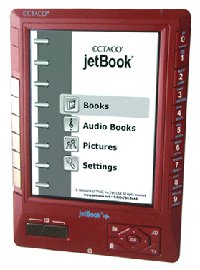 The original jetBook shares most of the same specs listed above for the Lite, except that it weighs 7.5 ounces and has a built-in rechargeable battery as mentioned above.

The rechargeable battery is rated for 20 hours of reading before needing to be charged.

Another difference between the two, this model has a built-in audio player for listening to MP3 files.

The original jetBook sells for around $150 - $180 from websites like Newegg and Amazon. 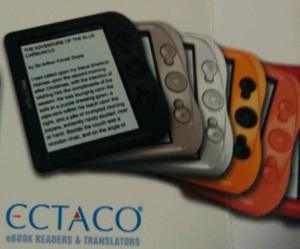 A Target employee managed to leak a photo of a new jetBook Mini over at Mobileread.

The jetBook Mini is shown as part of a coupon advertisement for Energizer's AAA Ultimate lithium batteries, and the ad says that they are recommended by Ectaco for use in the jetBook Mini. The ad also says that the batteries will last for over 70 hours, presumably it is referring to the estimated battery life of the Mini using those batteries.

The new design and button layout is reminiscent of the popular PocketBook 360.

After contacting jetBook about the new device, they have decided to wait until a later date to reveal any more details about it, most likely sometime in August.

Considering the jetBook Lite sells for as low as $99, the jetBook Mini may just beat that price. We'll have to wait and see.