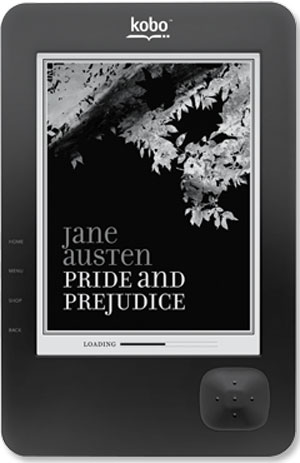 Less than six months after the release of the first generation Kobo eReader, Kobo has released a wireless version that connects to the Kobo ebook store for downloading ebooks and periodical subscriptions to the reader itself.

Aside from the added wireless, the Kobo WiFi comes with some hardware upgrades as well. It has a new processor for faster page-turning, battery life is longer, and it comes with a newer Vizplex screen that supports 16 shades of gray, twice as much as the previous model.

For various reasons I never got around to reviewing the original Kobo eReader that came out earlier this year, so this review comes from the perspective of someone new to the Kobo Reader.

To be honest, I really wasn't expecting much from the Kobo WiFi because I know that it falls into the category of a basic ebook reader. It doesn't have as many features as the Kindle, Sony Readers, or Nook: It doesn't have the new Pearl screen, it doesn't have any kind of note-taking or highlighting capabilities, and there's no touchscreen or web browser.

But it does have its own advantages. The Nook isn't available outside the US and falls into a sub-niche with the color LCD screen, the Kindle doesn't support Adobe EPUB and PDF, the Sony Readers cost more and don't have wireless—that all combines to give the Kobo its own unique market.

To top that off the things the Kobo WiFi does do it does well. Much like the Kindle, it is designed to be an ereader that anyone can easily learn to use, even without needing to use a computer. The WiFi connection gives it the ability to be completely independent. You can download all your books from the Kobo book store with it, including free ebooks, or add your own ebooks via computer.

Ergonomically, it has good balance and is comfortable to hold. The back panel and navigation wheel have a nice textured, rubbery feel to them. I do wish it had some page turn buttons on the right side of the screen though, to make it easier to hold one-handed.

There are four buttons that run along the left edge for Home, Menu, Shop, and Back. While reading you can press the center of the navigation button to bring up the Menu, and press the up and down buttons on the nav controller to change font size.

The Kobo supports Adobe EPUB and PDF ebooks, so not only can it read ebooks from the Kobo ebook store, but also from a number of other ebook stores since Adobe DRM is the most widely used format. You can even borrow ebooks from local libraries to read on the Kobo WiFi using a desktop application called Adobe Digital Editions to transfer the ebooks to the Reader.

The Kobo Wireless has 5 different text sizes when reading EPUB ebooks and two font types, serif and sans-serif. From the menu you can jump to the next and previous chapters and move between chapters using the table of contents.

For ebooks downloaded from the Kobo ebook store there are a couple of added features that aren't available for side-loaded ebooks. One, there's a dictionary. Two, there's an option to force justification left. Also, side-loaded EPUB ebooks show page numbers in the margin where Kobo ebooks do not.

Aside from that, there aren't any advanced features like adding notes or highlights, no search, no jump to page, and no margin or spacing adjustments. It doesn't have bookmarks, but that's something expected to be coming via firmware update sometime soon. For now it remembers the last page read.

For organization, the Kobo WiFi has different sections for books, newspapers and magazines, and documents. Those sections are further broken down alphabetically by title, author, and last read. You can jump between letters or pages and view the ebooks as a list, by covers, or by both.

Overall, the reading experience on the Kobo WiFi is its best quality. Despite the fact that it doesn't have the new higher-contrast Pearl display like the Kindles and Sony Readers, the contrast and darkness of the text on the Vizplex screen is still worthy of respect (here's a close-up picture). The Pearl screens are nice but they are slightly overrated. There also seems to be some kind of optical illusion that makes the text appear darker when the Reader is black.

The Kobo can connect to the Kobo ebook store for downloading ebooks and periodicals via WiFi, but not to any other sources. Periodicals will download automatically on dates they are delivered with auto-delivery enabled. 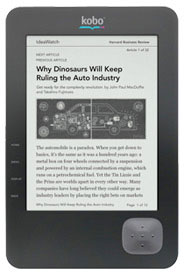 Browsing the Kobo ebook store is easy and relatively fast loading. The ebook store has a nice clean layout with lots of categories and searching options. There's even a section of free ebooks—and the device comes with 100 free classics pre-installed.

Once you download an ebook, it becomes apart of your Kobo library so that you can download it to other Kobo-supported devices and Kobo applications and sync the ebooks across platforms.

My main complaint about the WiFi is that you have to go through the whole process of turning the wireless on, having it scan for access points, selecting a router, and then joining the network each time you want to use it, instead of just automatically connecting when you turn the wireless on like with the Kindle 3 and Sony PRS-950. Hopefully they'll improve that with a firmware update.

The PDF functionality of the Kobo WiFi is basic compared to other ereaders, but it does do a serviceable job. There are 5 levels of zoom in increments of 25 from 100% - 200%, along with Whole Page view and Landscape view (which isn't available for EPUB ebooks, oddly enough). Once zoomed in there are on-screen arrows that indicate where to pan around the page and when to turn the page. 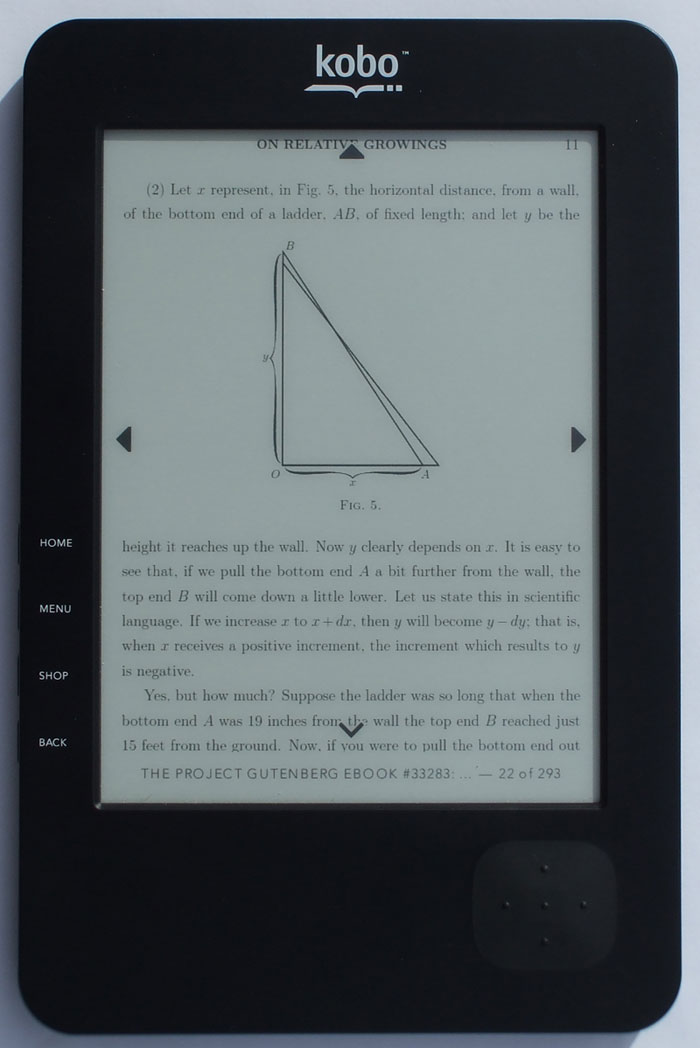 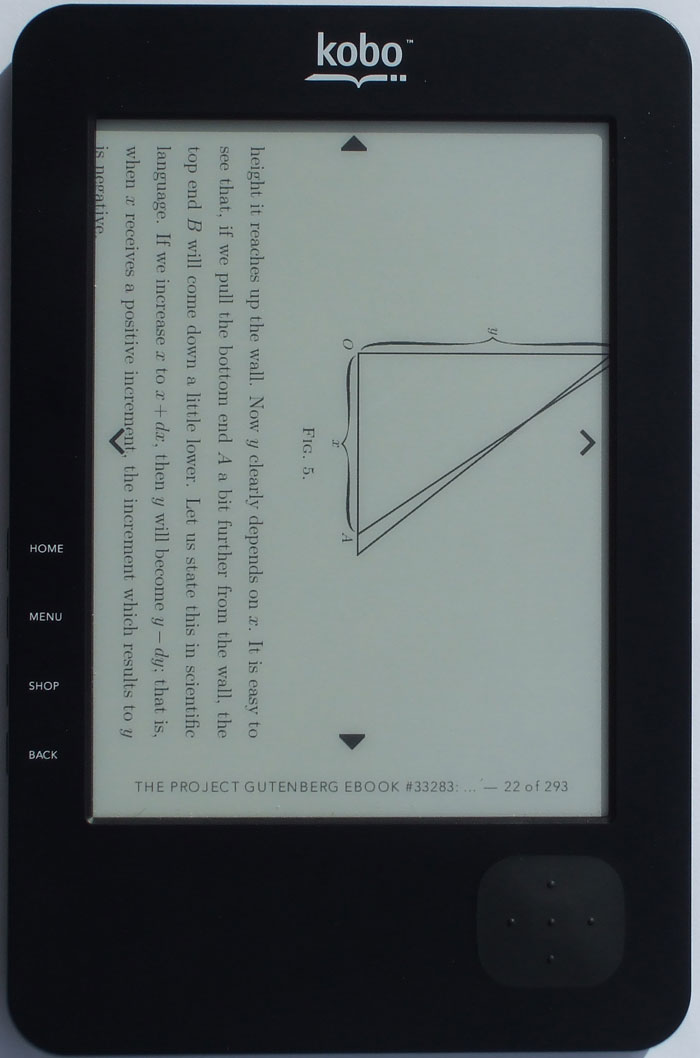 From the Menu you can jump between the next and previous sections and view the table of contents. But that's about it for functionality. There isn't any reflow mode. No active hyperlinks, go back, jump to page, notes, highlights, dictionary, etc.

On the positive side, the Kobo's PDF support, while not very advanced, does seem to be fairly stable. A 90MB test PDF that sometimes freezes up some ereaders works fine on the Kobo, although a little slow to turn pages. The text is nice and dark too, not always so on some devices.

Overall, Kobo has done a good job of updating the Kobo Wireless eReader from the first generation model by giving it some hardware upgrades, improving the overall stability and usability of the firmware, and pricing it competitively with other wireless ereaders.

What it comes down to is the Kobo WiFi is designed to be a low-cost ereader and to be easy to use—even for those without computers—and at that it does its job well.

The main thing to consider is that it doesn't have as many features as the Kindle WiFi and Nook WiFi, so you have to determine which features are the most important to you and weigh all the options to get the best ereader for your specific ereading wants and needs.