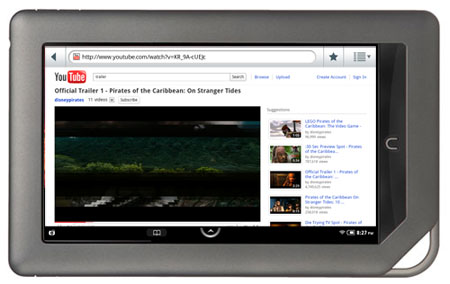 The biggest news about the new firmware update for the Nook Color is that it turns the ereader into a quasi tablet of sorts with the launch of Barnes and Noble's Nook Appstore. The Nook Color can now install a variety of apps straight out of the box without the need of rooting or any hacking (of course you can still do that if you choose).

Those familiar with Android will no doubt be disappointed with the new firmware and appstore. The Appstore has a very meager selection at present—about 139 apps at launch, and only about 15 free apps.

The good news is that will change quickly as more apps get added. The bad news is the Nook Color can only install apps from the Nook Appstore, not 3rd party apps. And apps aren't transferable to other Android devices.

What I don't like about the Nook Appstore is that several apps are more expensive than they are elsewhere. And even basic apps that come free with virtually any Android tablet like a calculator or clock cost money. But again, this will likely change as more apps become available...hopefully for B&N, or it will just drive more people to rooting and ROMs.

The web browser has been upgraded to support Adobe Flash. Additionally, it now has desktop and mobile browsing modes. Flash seems to work well in some instances, but not all. YouTube works well, and a few random videos I happened across, but trying to watch television episodes at network channels—ABC and Fox—yielded very choppy video, unwatchable in fact. Hopefully this is just an issue with the Adobe app that can be fixed, because even high-end tablets like the Motorola Xoom don't always play Flash video smoothly—but at least it's watchable.

B&N added an email app that works with the Gmail, Yahoo, Hotmail, AOL, and probably others. The app has a nice clean layout with all your folders and lists available (at least with Gmail) and will notify you when you get new emails; a small email icon pops-up in the lower left corner of the notifications bar. Haven't used it much, but everything seems to work well so far.

For the most part, the ebook reading aspects of the Nook Color remain the same with this new firmware. They added the option for page-turn animations, but not the fancy 3D kind, the pages slide from left to right and vice versa. I really wish they would have added the option to read in landscape mode, but I guess that's not going to happen (what's strange is that landscape mode works fine on a rooted Nook Color when using the Nook Android app).

The LendMe app has been replaced with a Nook Friends app, which allows you to share between friends what you are reading, even lend certain ebooks back and forth. Once you accept friends into your list, you can browse and borrow their lendable titles.

In the end the new firmware adds some new elements to the Nook Color that will probably be enough to satisfy casual readers and tablet aficionados, but anyone with any kind of experience with android tablets will likely be disappointed with the limited selection of apps and being locked out from installing apps from other sources. For those people there are still roots and ROMs to unlock the Nook Color to install apps and different versions of Android, including Honeycomb for the true Android tablet experience.