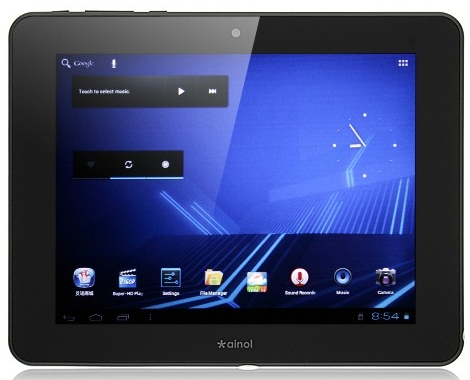 So, there are lots of new tablet choices coming out in the market along with lots of e-readers that are built around good, solid tablet technology. Examples of the latter are the Nook HD and the new Kindle Fire lines. They’re certainly as affordable as they ever were before, but that roughly $200 price tag might be a bit much for some. A traditional tablet like the Nexus 7 and the new 7 inch Galaxy Tab fall into a bit lower price bracket, but one of the primary reasons some of us get tablets is to read books.

With the exception of  eink readers and the iPad line of products, no US products feature the 4:3 aspect ratio screen that makes reading a bit more pleasurable. The iPad is a great machine, but it’s expensive and huge… the iPad mini is about the right size, but it’s still on the cost prohibitive side of things. Chinese tablet manufacturers have started producing some affordable 7 inch tablets built on ICS, using a 4:3 traditional screen ratio. The Ainol Novo 7 Legend is one of these products. How does it hold up as a tablet and as an e-reader? Read on.

Not a bad little tablet for less than most monthly cell phone bills. It’s certainly a bit limited, but the combination of the color screen, the size, the 4:3 aspect ratio, reading app compatibility, and the fact that this costs less than a third of the cheapest iPad mini makes this a compelling ereading alternative. If you decide to get one, do yourself a favor and order it from a reputable place like Gadgets Dealer. They might be a bit backlogged on orders, but it’ll ship in a few days. Do yourself another favor and pay for the expedited shipping… that is if you want to see the tablet in the next two months. China Air Post is horrible.

Estimated Price: $75 to $95, depending on shipping at Gadgets Dealer

Nothing much to see here. Like most Chinese tablets, this one is pretty plain-Jane. If you’ve seen any Ainol tablet before, you'll know what to expect here. This isn’t a bad thing, though. Corners are rounded, the front is nice and clean, with only the obligatory Ainol logo, and nothing is really cluttered anywhere. The back is a pleasant charcoal gray with a VERY slight texturing and only the one speaker grill along with some obligatory text.

Holding the tablet in landscape, along the top edge you’ll find the normal power button and volume rocker along with the arguably useless physical back button. I would liked for this button to have toggled the Android taskbar, rather than just replicating the back function on an awkward to access part of the tablet. Nothing on the bottom or left, and the right side houses the dc input jack (boo), a micro-usb port for sync and charge functions (good thing, since no dc adapter is included), a mic, headphone port, and micro-sd/tf card port. Nice and simple. I like it when manufacturers keep tablets this clean, and Ainol has always been good about that. The CPU is nothing to write home about, but it gets the job done, the RAM is minimal, storage is acceptable, and the battery life is an about average 3000 mah. Nothing eye catching, but all decent, nonetheless.

Really, here’s the whole reason I got this tablet. I like the 4:3 aspect ratio, but a 10, 9, or even 8 inch screen seems a bit large to me for reading purposes (I’m 5’5” and have what others might call little-girl hands). Nobody makes a 6” tablet (other than e-ink readers), and virtually all 7” tablets are widescreen. Only a few 7” tablets have a traditional aspect. Size is important, and this tablet is only about an inch larger in both dimensions than a Nook Simple Touch. That’s nice.

Screen resolution on this is the same as the older e-ink screens, so it should suffice for reading, and it doesn’t disappoint there, too much. Colors are replicated pretty well, everything is reasonably sharp, given the resolution, and there’s only the occasional lag caused by the lack of RAM. Don’t get me wrong... it’s no IPS screen. It’s not super bright, and viewing angles are a bit more limited than really high quality screens. All of that said, though, it’s a steal for the money. Magazines work in full color. Internet sites have color and refresh fairly fast. Scrolling is pretty smooth. And, touch sensitivity is surprisingly accurate and smooth. Not bad for less than a Ben Franklin.

Not too much to say here. It’s ICS, and a fairly clean load of it, at that. Some compatibilities with apps exist (Chrome doesn’t load, for example), but most apps run fine. Dolphin browser runs like a champ, all e-reading apps I tried run great (Nook, Kindle, Kobo, Google Play Books, Aldiko, Sony Reader, Adobe PDF Reader, Overdrive, and the like), and a whole lot of games work (I got everything from Rovio to run, and Bad Piggies is actually pretty smooth on this machine). It’s a clean ICS load with obligatory, but minimal Chinese bloatware on top. It all de-installs easily enough, though, so that’s not a big issue. If you’ve used ICS, you know what to expect... also expect slowdown, however. Apps run fine, but the actual Android interface is sluggish due to only 512MB of system RAM. It’s not that bad, but it’s noticeable, so expect it.

Well, it’s no Nook HD... the resolution is only 800x600, but text looks pretty sharp in the ereading apps, surfing the various shops and conducting searches is a fairly nice experience (especially since the virtual keyboard doesn’t eat the whole screen), and the apps are actually quite responsive. Because of the screen aspect, this thing rocks, here. I have no complaints, except that I’d loved to have seen an IPS XGA screen, but that’s in a coming review...

Expect to do a bit of pinch and zoom, but magazines show up in color and in an aspect that actually does help minimize zooming to a large degree. Don’t expect retina display results... retina display, this is not. It gets the job done, but it’s much better at plain old text. Having the ability to view color magazines and such in a small 4:3 aspect screen is a nice feature, though.

This is a bit hit and miss (more hit than miss, thankfully). Some apps simply won’t install. They list as being incompatible with this tablet. The play store runs just fine, but won’t allow for installation of seemingly random things like Chrome. It's a rarity to find ones that won’t work, but they’re out there, and you'll see them. For a Chinese tablet, though, this is a decent effort.

Not bad... I was pleasantly surprised by this single core processor. Bad Piggies (choppy on some mainstream single core tablets with faster processors) actually runs pretty smoothly. Games made for a wide display might be a bit awkward on this aspect ratio, but thats a trade-off.

Headphones sound good on this unit. that is, headphones except for the ones its packaged with. Those are crap. The speaker is respectably loud, if a bit tinny. Bluetooth... whats that? This thing has no Bluetooth.

HDMI? We dont need no stinking HDMI. No video out, at all. Videos on the screen are a bit pixilated, due to the aspect ratio and limited resolution, but streaming video played just fine, all at full speed. Not bad. Not particularly good, but not bad. This is another one of those tradeoffs.

Who should buy this?

This ones a bit of a tough cookie to answer. On the one hand, if you MUST have a 4:3 screen and MUST have it in color, ask if price is an obstacle... if not, the iPad mini is a MUCH better solution. If you want an Android parallel to that whole experience, this isnt a bad compromise at a quarter to a third of the price. I got this with express shipping from China and had it in my hands in one week. I paid under $100 USD, total. You need to weigh the cost vs. the obvious performance gains the iPad mini will have. All in all, though, this is a fairly compelling color e-reader that also happens to be a decent Android tablet.