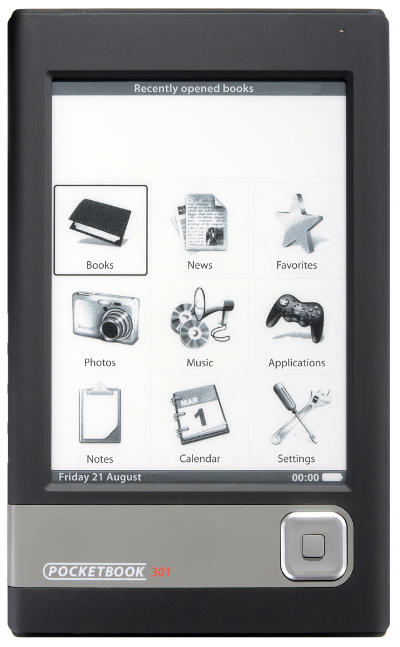 The PocketBook 301 was first released back in 2007. The updated version, the 301 Plus, replaced it in Summer 2009 with some improved features, software, and hardware upgrades.

The hardware for the device is manufactured by Netronix, a OEM for several ereaders and other electronics. Like the Kobo eReader, Astak Mentor, Cybook Gen3, and several others, the PocketBook 301 is based on the Netronix EB-600 ebook reader.

The main thing that differentiates all these ereaders from each other is that they all have different firmware and slightly different outer casings. The PocketBook has the best firmware of them all. And they just dropped the price to $220 (with cover) in the US, 265 in Europe, and $340 in its native country, the Ukraine.

PocketBook ereaders sell all over the world from various websites such as Amazon.com, PocketBookReader.com, and from Amazon.de and Amazon UK in Europe, and PocketBook.ua in the Ukraine.

The first thing that jumps out about the PocketBook 301 is how incredibly light and wafer-thin it is. At 174 grams (6.1 ounces), it's one of the lightest 6-inch ebook readers, half the weight of the Nook and 60% the weight of the Kindle. The downside, though, is that it doesn't feel as sturdy as either of those.

The second thing you notice is how versatile the firmware is; no other brand of ereader even comes close. There are customizable options for everything.

You can add fonts and dictionaries, change the appearance of icons and book lists, and even control the function for every single button on the device.

I don't use the audio so I changed the music button to page forward. And each one has a second function for a long press. There are 20 button options overall, with over 30 commands to choose from.

And that's just the beginning. Want to change the the name a book? Copy it to and from the memory card or move it to a different folder? Not a problem. It can all be done within the book menu of the PocketBook 301.

That's the thing about the PB 301: On the outside it looks like a basic, nothing-special ebook reader that's past its prime, but then on the inside it's got a lot more going for it than most of the big-name ereaders currently on the market.

It comes with 512MB internal memory and has an SD memory card slot. It supports audio and image files, MP3, JPG, BMP, PNG, and TIFF. There's a 2.5mm headphone jack hidden under a cover on the bottom edge of the device, along with the mini USB port.

In addition to the directional pad on the front, there are four buttons that run along the left side, two on the lower-right side, and one on top for the power.

By holding the center button down on an ebook in the library, you can choose the default program to open the book.

FBReader is an open-source ebook reading program available for multiple platforms including PCs, some smartphones, Android, Linux, and others.

The great thing about FBReader is that it takes a poorly formatted ebook and turns it into a nicely formatted one automatically, where you can control the font type, size, line spacing, text encoding, margins, hyphenations, and line breaks all from within the settings of the ebook itself.

The PocketBook 301 has surprisingly decent PDF capabilities for a 6-inch ebook reader, probably one of the best in fact. While PDF support on any 6-inch screen is less than ideal, PocketBook at least gives the user more control over how the PDF is displayed than other brands.

There are two programs for viewing PDF files. Adobe Reader and pdfviewer. Here's a good post a MobileRead that illustrates some differences between the Adobe Viewer and the pdfviewer. With both programs, there are several different ways to display PDF files. First, the default size fits the PDF to the screen. If you have good eyesight you might get along with this, but if not you can set the custom zoom between 75% and 180%. The zoom is fixed; it doesn't reset with each page turn like with Sony's ereaders.

There's an option to view the files in columns, which zooms in and splits the page into the number of columns specified.

A fit-width option removes the margins and fits the text to the screen. This is one of the best options for viewing PDFs on the 301.

Reflow will change the formatting of the file so that you can increase font size with different levels like an ebook. This works okay for text files but can do strange things with the formatting of more complicated PDFs.

And lastly, there's an option to view 4 or 9 pages at one time. This works good if you need to scan through pages quickly.

Highlights: The PB 301 can highlight lines of text to add them to a notebook application which can be referenced within the ebook or separately on the home menu. The highlights are saved as HTML files so you can copy them and view them on a computer. Dictionaries: There are multiple dictionaries available for the 301, foreign languages and translation dictionaries for English to Russian and such. There's a dictionary converting tool available so that you can create more.

Screenshots: This feature can be very useful but most ebook readers don't have the ability. Fortunately, PB does. You can program the power button to take screenshots with a double tap, or single tap and then select screenshot in the menu. The image is saved as a BMP file.

Search: There's a search function and on-screen keyboard for finding words or phrases in a book.

Apps: With the PocketBook 301 you can install applications and even create your own; here's the current list and SDK download. Apps included on the device are an RSS news reader that works great with Calibre, calendar, notes, sudoku, chess, cards, clock, and more.

Tips and Tricks: Here's a post a Mobileread that lists a bunch of helpful tips for the PocketBook 301.

The PocketBook 301 has a ton of useful features from a firmware standpoint, but it lacks the advanced features of its biggest rivals. No wireless, no touchscreen, no keyboard, no ebook store built-in. And on top of that, the PocketBook 301 costs about the same or more than other devices that have those features. 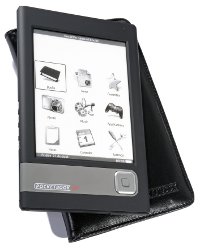 But if you have no need for wireless, or if you need more versatility from an ebook reader for foreign languages, dictionaries, PDFs, etc., then the PocketBook 301 is worth the extra cash.

The thing is, PocketBook—the company—doesn't have the benefit of selling zillions of ebooks to generate extra cash flow like Amazon, Sony, and B&N, who all can afford to sell their ereaders for cheaper because they can make up the difference by selling ebooks.

Smaller companies like this are going to have to rely on quality products that give consumers something they can't get anywhere else, and so far PocketBook seems to be delivering on that quite well. I personally can't wait to see their new 9.7-inch ereaders that are supposed to be coming this fall. With PocketBook's advanced firmware, they're likely to be popular with students and business professionals.