Bookeen, based in Paris France, manufactures Cybook ebook readers. Bookeen has been around since 2003 and was founded by two former engineers of Cytale.

After Cytale went bankrupt, the two engineers purchased the rights to the Cytale reading device, made improvements to it, and then renamed it.

Bookeen develops the firmware for their ebook readers and offers users the option of Mobipocket compatibility or Adobe Digital Editions compatibility (note that both cannot be used at the same time; it's either or).

Bookeen has two ebook readers available on the current market: the Gen 3 and the Opus, a smaller pocket-sized device with a 5-inch screen similar to the Sony PRS-300 Pocket Edition and BeBook Mini. 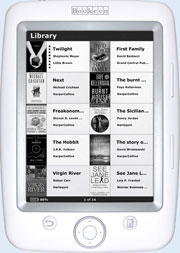 Released in July of 2009, the Cybook Opus is very small and light at 150 grams (5.3 ounces), and it sports a sizable amount of internal memory with 1 GB, enough for almost 1000 books. It also has a micro-SD card slot for expansion.

The Opus is known for its ergonomic design, and offers customizable folder options for sorting your ebooks more easily. It sells for around £199 ($225 USD).

The Opus supports a wide variety of formats, allowing for the purchase of DRM protected ebooks in PDF and EPUB from sellers like BooksOnBoard and Powell's Books. 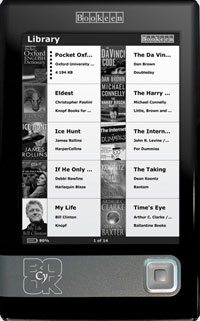 Bookeen's Gen3 dates back to October 2007. Like most popular ebook readers, the Gen3 has a 6-inch E Ink screen, and operates in both portrait and landscape modes.

It is one of the lightest 6-inch ebook readers available and is most popular in European markets.

It supports Mobipocket formats out of the box and allows for adding different font types.

The price is comparable to similar devices at £200 in the UK, but the cost is much more expensive in the United States at around $350. 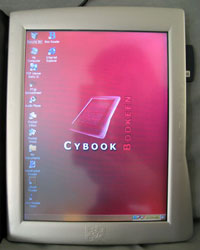 Before Bookeen existed, the original ebook reader went by the name Cytale, and dates back to the late 90's. After changes in to the operating system, Bookeen released their version in 2003.

It was considerably larger than today's ebook readers: 1-inch thick with a 10-inch screen. And the device didn't use electronic paper. Consequently, the battery only lasted a few hours.

About the only photo of the thing still around is this one from Wikipedia. It looks more like a small computer than an ebook reader in the early days, especially with the Windows operating system.

Depending on the firmware you choose for your Bookeen ereaeder, you can get DRM protected ebooks in PDF and EPUB from a number of online sellers like Waterstone's, BooksOnBoard, or Powell's Books.

If you'd rather your device support MOBI files you can go with Mobipocket and choose from about 120,000 titles on their website.

Mobipocket doesn't allow DRM-protected ebook support for both their format and Adobe Digital Editions at the same time.

Another option, eBooks.com, has both format types, and has around 200,000 titles to choose from, with a wide range of fiction and academic books.

In addition, there are a number of websitesManybooks, Project Gutenberg, Mobilereadthat have countless free ebooks in multiple formats. Visit our free ebooks page for more information about them.