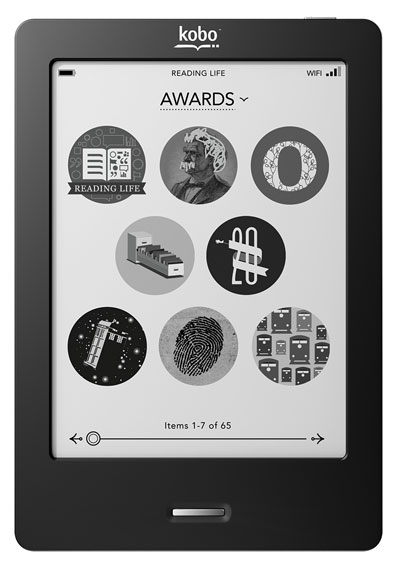 The Kobo Touch eReader is the latest addition to Kobo's line of ebook readers. It replaces the Kobo WiFi but maintains many of the same features while adding some software and hardware upgrades.

The Kobo Touch comes in four color varieties: Lilac, Blue, Silver, and Black. Staying true to Kobo's low-priced approach, it sells for $139 in Canada and a competitive $129 in the United States, $10 less than the Kindle 3 WiFi and new Nook Touch.

Update: Since this review was written, Kobo has issued some firmware updates that have added new features. Check this blog post for details on the new features and for a video review showing them.

The Kobo Touch connects to the Kobo ebook store over WiFi for downloading ebooks, newspapers, and magazines. It also has a basic web browser capable of downloading ebooks from other sources, such as free ebook websites.

The Kobo Touch comes with 2GB of internal memory, with 1GB user accessible, and a microSD card slot for cards up to 32GB.

What makes the new Kobo ereader special is the addition of an infrared touchscreen that uses the same Neonode zForce technology that the Sony Readers made popular in 2010. Additionally, the Kobo Touch uses the latest screen technology from E Ink called Pearl. Pearl screens have improved contrast with darker text than previous screens used on the earlier Kobo ereaders.

Touch responsiveness is very good and the touchscreen does not negatively affect the E Ink display in any way. You use the touchscreen for navigation and for turning pages. The Kobo Touch has just one hardware button that directs to the homescreen, and there's a slider switch to turn the device on and off.

Other upgrades with the touch model include a new Freescale i.MX508 processor for increased speed and performance, improved PDF support with zoom and pan, additional format support, the implementation of a basic web browser, and it includes a feature called Kobo Reading Life that tracks reading stats and reading awards.

Reading on the Kobo Touch

Like the first two Kobo ereaders, the Touch Edition is designed to be easy to learn and simple to use. The user interface is straightforward and intuitive, especially so with the touchscreen.

The Kobo Touch has a soft rubbery coating with a quilted back that gives a pleasant feel. It only weighs about 7 ounces so it is comfortable to hold one or two handed. The bezel is quite small along the sides and top, so I find it feels most natural to hold it from the bottom, using a thumbswipe to turn pages.

The Homescreen and Library 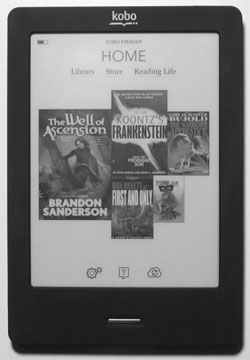 Pressing the silver button below the screen always takes you to the homescreen, which shows the covers of the five latest read books. From the home you can sync your library, access the help and settings menus, jump to the library, launch the store, and find your reading stats and awards in the Reading Life section.

The library view is broken down into four sections: books, news & mags, previews (usually the first chapter or so of a book), and shortlist (favorites). The library can be organized by recent reads, by author, and by title.

There are three library views, one that shows a list with the book's cover, format, title and author, another that shows just book covers, and the last view shows one large book cover at a time, along with the author, title, and format. There's a menu icon that brings up options for adding an ebook to shortlist, mark as finished, delete, read now, and bring up the TOC.

There's a search feature too, which pops up an on-screen keyboard. What's nice is that it shows results as you type.

A new feature with the Kobo Touch is the ability to set how often you want full-page refresh, the black flash when turning pages. Like the Nook Touch, it is set to update the entire page once every six page-turns by default. With the Kobo you can set it to update every 1 to 6 pages.

When reading ebooks, there are seven font types to choose from, and a whopping 17 font sizes. Shortly after writing this review, I found out that it is easy to add additional fonts to the Kobo Touch. For navigating there's single level table of contents support, a page slider, and arrows for jumping back and forth between chapters. Holding down on a word brings up options for highlighting and accessing the Merriam-Webster's Dictionary.

The Kobo Touch has the ability to adjust line spacing, margins, and justification thanks to a firmware update issued shortly after launch. On the downside, it doesn't have bookmarks or notes. The bookmarks it does have just keep track of the last page read. It doesn't have landscape mode either, except for PDF files. Hopefully these features will get added with a future firmware update.