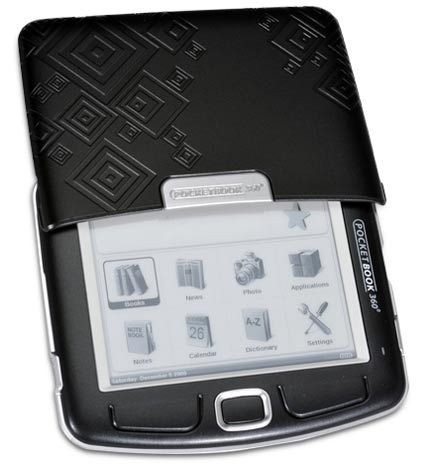 The PocketBook 360 Plus is the updated version of the original PocketBook 360. Notable upgrades with the new model include a faster processor, more RAM and internal storage, and WiFi for downloading ebooks wirelessly as well as news feeds and using a basic web browser.

The PocketBook 360 Plus packs a lot of features despite its diminutive size. It has a 5" E Ink Vizplex screen, WiFi, 2GB internal memory, a microSD card slot for cards up to 32GB, an accelerometer for automatically switching screen orientation 360°, long battery life (8000 page-turns), user-replaceable battery, and mini-USB port.

What makes the PocketBook 360 unique is its design. It is the only ereader to incorporate a hard shell cover to protect the screen, which snaps on and off, and can be placed on the back of the device while reading.

When it comes to software, the PocketBook 360 is loaded with customizing options and supports a wide range of ebook formats, including those with Adobe DRM. Here's the list of supported ebook formats: EPUB, PDF, HTML, DJVU, RTF, TXT, PRC, MOBI, CHM, DOC, DOCX, TCR, FB2, FB2.ZIP.

There are three different programs for displaying those formats, Adobe Viewer, pdfviewer, and my personal favorite FBReader. Holding down the select button on a book brings up the "open with" option.

Actually there are two other ereading programs you can load onto the PocketBook 360 as well, CoolReader and FBReader 180, an updated version of FBReader with more features, including wrist turns, which uses the accelerometer to turn pages by twisting the PocketBook 360 with your hand. I haven't tried those two programs personally, but others have had success. More information about them can be found in the PocketBook section at MobileRead.

Like PocketBook's other ereaders, the 360 uses a folder system for organizing content. You can create, edit, and delete folders directly on the PocketBook, and move ebooks and documents to and from the internal memory and microSD card. Additionally, the PocketBook 360 has key mapping so you can set the functions for all the buttons on the device for long press and short press.

Other unique features include the ability to take screenshots, download RSS news feeds, install themes for customizing the appearance and layout of the user interface, set different user profiles, install additional dictionaries and apps, and you can set how often you want full-page update when turning pages.

The PocketBook 360 is highly-portable because it is among the smallest and lightest ebook readers on the planet, the ergonomic design makes it comfortable to hold left or right handed in both portrait and landscape modes, and the plethora of customizing options combine to make it one very versatile ereader.

Ereading features include adding notes and highlights—both are tied together; you can add a text note to a highlighted section—automatic page rotation, search, open page, multi-level table of contents support, bookmarks, dictionary, and there are various font adjustment options depending on the program.

The PocketBook 360 uses FBReader for displaying various types of ebook formats. With it you can customize the layout of the page a number of different ways. There are 10 font types pre-installed, plus you can add more by placing them in the PocketBook's font folder. There are 20 font sizes. You can adjust line spacing, text encoding, margins, hyphenations, line breaks, and page update speed/quality.

One problem with FBReader is that it only works with DRM-free ebooks. Adobe Viewer has to be used for PDF and EPUB ebooks with DRM.

The Adobe Viewer can be used with EPUB and PDF ebooks. The main difference with ebooks using the Adobe Viewer is that you can't change the font type, spacing, margins, etc., like with FBReader; you're stuck with the standard font and publishers' layouts. All the same functions apply otherwise, search, dictionaries, TOC, hyperlinks, notes, etc. There are 7 font sizes for EPUBs with Adobe Viewer.

As mentioned earlier, there are two programs for displaying PDF files, Adobe Viewer and pdfviewer. Both are very similar but have subtle differences. Both offer several different ways to display PDF files, including landscape mode. First, the default size fits the PDF to the screen by width. The zoom settings range from 75% and 180%. There's a preview feature that shows 4 or 9 pages at once. Text re-flow goes from 150% - 500%. There are options for PDFs with columns as well, from 2-5 columns. Lastly, Adobe Viewer has a setting to switch text left to right and right to left.

Viewing PDFs on a 5" screen is probably the last thing most people are going to do with the PocketBook 360, but since it has PocketBook's firmware it does a serviceable job with all the adjustment and zoom settings.

The PocketBook 360 comes with a news feed application that lets you add RSS news feeds. Setting them up is time-consuming because manually entering the url of the news feed address can take awhile with the on-screen keyboard, but once you enter the feed address you won't have to enter it again. Just hit update, connect to WiFi, and the news feeds download.

The 360 comes with several applications. There's a calendar, photo viewer, web browser (more on that below), calculator, dictionary—there are actually 3 dictionaries, plus you can install more—and a clock. There are some games too: chess, solitaire, snake, and sudoku.

Unfortunately, it doesn't come with Doom II, which it was shown playing in a video earlier in the year. Not that that's something an ebook reader is designed to do, but it would be fun to try.

The PocketBook 360 Plus connects to PocketBook's Bookland ebook store over WiFi, but Bookland is a half-hearted ebookstore with a hard-to-navigate layout and scanty selection, at least for newer books. Navigating the Bookland bookstore from the 360 is a slow and painful.

Luckily the PocketBook 360 supports Adobe DRM so you can get ebooks and other digital content from a wide range of ebook stores, as well as borrow ebooks from libraries and get public domain ebooks from free ebook websites.

Like the Bookland ebookstore, using the web browser requires a lot of patience, largely because using the on-screen keyboard is torturous work, plus there doesn't appear to be any way to add bookmarks. If there was a way to add bookmarks it wouldn't be so bad. On the positive side, the browser works for downloading files. I was able to download a few free ebooks in different formats from Feedbooks without a problem. The downloads automatically appear in the root folder.

Some folks will probably be turned off because it uses a Vizplex screen instead of the newer Pearl screens. Comparing the PocketBook 360 Plus side-by-side with the Sony PRS-350, the difference is hardly noticeable. The improved contrast is more noticeable on the Kindle 3 because Amazon uses thicker fonts.

The three major ebook readers for 2011 are all slightly cheaper than the PocketBook 360 and have larger 6" Pearl screens, referring to the Kindle 3, Kobo Touch, and Nook Touch. But none of those have anywhere near the format support the 360 does, nor do they have advanced features like key mapping, page update settings, support for 14 different languages, etc. So it all comes down to what features are most important for your ereader.