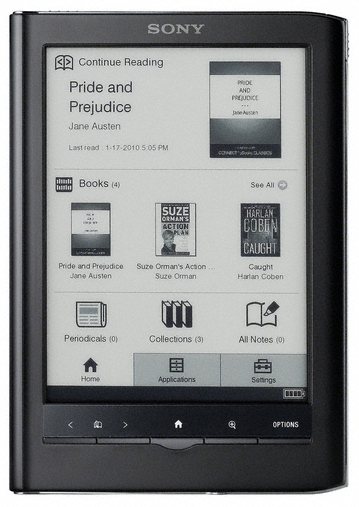 With the release of the new Sony PRS-650, Sony's popular "Touch Edition" ereader stands to be even more popular with a new glare-free 6-inch display, several feature upgrades, and a slimmer, lighter design.

The PRS-650 is Sony's third attempt at a touchscreen ebook reader. The PRS-700 was the first. It had LED lights built-in to the sides and had a touch layer over the top of the screen that caused reflection and glare. It was off the market in 8 months.

The PRS-600 followed. It did not have any lights, but still had a reflective touchscreen layer over the E Ink display. This single detail kept many people away from Sony's touchscreen ereaders.

The good news about the PRS-650 is that problem has been solved completely, and the touch is more accurate and easy to use than any of the previous touch readers. Not to mention the new Sony Readers all use the latest higher contrast Pearl screens to make the text appear darker and more defined.

Having tested the Sony PRS-350 for about a week before the PRS-650 arrived, it becomes apparent that the two devices are pretty much exactly alike. They both have all the same features from a software standpoint, with the exception that the PRS-650 has an audio player.

Other than that all the touchscreen functions and features are the same: you can add freehand notes and scribbles, type memos and notes with the on-screen keyboard, add highlights and bookmarks, double tap a word to bring up the dictionary, manually adjust the screen contrast, create, manage, and delete collections, run searches, activate hyperlinks, and so on.

The main difference is the PRS-350 has a 5-inch screen instead of a 6-inch screen so it is considerably smaller and lighter.

The other difference is the PRS-650 has SD and Pro Duo memory card slots and has a headphone jack for listening to MP3 and AAC audio files, while the 350 does not.

Despite the similarities between the two, the reading experience is actually quite different.

Both are very comfortable to hold and operate one-handed, but the smaller 350 weighs about 2 ounces less and sits in your hand a little more securely. It's so lightweight that you almost forget you're holding it.

They use the same exact text sizes so the difference in text on-screen and the frequency of page-turns differs a lot between the two. The text sizes feel more natural on the 650; the 350 could really use another font size between small and medium.

Overall, I find myself more drawn to the Sony PRS-650. I like the larger screen size and being able to quickly add ebooks to the SD card instead of messing with the USB cable. It all comes down to personal preference, of course, and the more I use the 350 the more I like how small and portable it is, so it's not an easy choice to make either way.

Comparing the new PRS-650 to the earlier PRS-600, many of the features remain the same, the main difference is of course the touchscreen. The PRS-600 had an added layer over the E Ink screen that caused glare and reflection, whereas the new Sony PRS-650 doesn't have an added layer over the screen because it uses infrared to detect input.

Aside from the upgraded screen and 2.5 ounce lighter build, new features for the Sony PRS-650 include:

There are a few things about the Sony PRS-650 that could use improving, mainly the same things that are listed on the PRS-350 review: the lack of styling options, such as changing line-spacing, margins, font type, etc, all of which requires adding fonts and editing the CSS file of an ebook to change styling; the fact that landscape mode breaks pages into two sections for ebooks, showing duplicate sentences; and other minor annoyances like having to go through multiple menu selections for certain features and settings.

There are a lot of groans to go around when looking at the price tag for the PRS-650. With the Kindle WiFi going for $139 and the Nook WiFi selling for $149, $229 for the non-wireless PRS-650 seems a bit steep, even considering the touchscreen.

The thing with Sony Readers, though, is that they never stay at the launch price for very long. Both Amazon and B&N's prices are essentially locked: they never run sales on their ereaders; once the price is lowered it stays at that price.

With Sony, having their ereaders available at so many different retail locations, their ereaders often go on sale and then drop in price a little more every few months.

By the time Christmas rolls around, the PRS-650 will probably be on sale for around $200.

As far as wireless is concerned, it all comes down to personal preference. It is a really nice perk with the Kindle 3 being able to email ebooks and documents to it with the free Kindle email address. Just turn the Kindle 3 on and the books are at the top of the list, ready to go. And then there's the web browser too for downloading ebooks directly.

Those are all major pluses for the Kindle. But it also lacks many of the features that the PRS-650 has, the touchscreen navigation, being able to add freehand notes, support for Adobe DRM and access to free library ebooks, memory card slots, and more advanced zooming options.

In short, the Sony PRS-650 with its upgraded touchscreen stands to be one of the top ereaders for 2010, despite its lack of wireless and lack of styling options. All of its other features and support for a wide range of ebook stores makes it a solid choice. It will be interesting to see how it stacks up against the 7" wireless PRS-950 that's due out in November.