The Best Tablets for eReading

Instead of making this a top 5 list like with the Best eBook Readers page, I decided since there are so many tablets on the market it would be better to put together a quick guide to help you determine the best tablets for ereading, along with my top five picks for this year.

The first and most important thing to consider when buying a new tablet is how you or the person you are giving it to intends to use it. If ereading is going to be a big part of overall usage, this leads to the question of what size tablet is the best for ereading.

In my opinion, when it comes to reading ebooks specifically, smaller 7-inch tablets are better because they are lighter and more comfortable to hold for long periods of reading. Plus ebooks just tend to be better suited for a 7-inch screen than a 10-inch screen because it's more akin to reading a paperback than a big reference book.

When it comes to reading online, reading large PDF documents, reading comics and magazines and the like, I find tablets with 9 or 10-inch screens to be better suited for those forms of ereading. All will work just fine on a 7-inch tablet, but are more enjoyable on a larger screen. Entire web pages can fit on a screen and require much less zooming and scrolling, PDFs were made to be displayed in larger form, and comics and magazines often don't even need to be zoomed in at all on larger screens.

A couple of other things to consider, I find 7-inch tablets easier to take with me when leaving the house and for traveling. The smaller size makes them easier to stick in a bag, glove box, or large pocket. I usually prefer to take a 7-inch tablet when going somewhere rather than lugging around a larger one. But at home, I almost always prefer to use a larger tablet for most tasks than a 7-inch tablet. Except for reading ebooks. But then again I don't like using 7-inch tablets for that either. I'd rather use an E Ink ebook reader for reading ebooks.

Another thing to consider with tablets is how easy it is to find and install ereading apps. Some cheap Android tablets have limited app markets or dated operating systems that hamper installing ereading apps. It's always a good idea to do some research and read reviews before buying cheaper, lesser-known tablets.

Now, the last and most important thing to consider when choosing a tablet specifically for ereading is to get one with high pixel density. The higher the screen resolution the better. Anything above 200 pixels per inch is really good for ereading, and anything above 240 is great. To get the number for any tablet, just enter the screen resolution numbers and screen size from the specs into this PPI calculator. The higher the number is the clearer and sharper text is, which is very important for ereading.

As a starting point, here's my list of the best tablets for ereading and why I chose them, in no specific order. 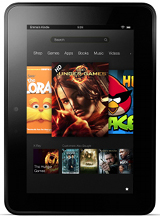 Given the low prices and high resolution screens, it's no surprise that the Kindle Fire HD tablets are among the best tablets for ereading. They have all the usual Kindle reading features plus some newer ones like text-to-speech, audiobook integration, X-Ray, and support for library ebooks.

And contrary to popular belief, you don't have to limit yourself to just Kindle ebooks. The Kindle Fire HD supports sideloading Android apps so you can install pretty much any other ereading app that you want, including news apps, comic apps, and even Amazon's competitors' ereading apps.

The user interface on the Kindle Fire HD has its share of flaws and limitations, however. Sideloaded content gets the back seat to Amazon's content. Sideloaded covers don't always display properly, app icons are blurry, and the limited interface can be frustrating, so it's not the best ereading tablet for everyone. 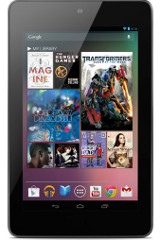 The Google Nexus 7 and Nexus 10 tablets are among the best tablets for ereading because of their open operating system that can easily install any ereading app, but more importantly because of the high resolution screens, especially the Nexus 10, which has 300 pixels per inch, making the highest resolution tablet on the current market.

The Nexus 7 would be my #1 top pick for a 7-inch ereading tablet if not for the fact the screen flickers. I don't know if all Nexus tablets' screens flicker—I highly doubt it—but I have to go off of my experience, and for me the Nexus 7's screen flickering takes away from an enjoyable experience when using the web browser because the flickering is annoying enough to warrant an epileptic seizure warning. 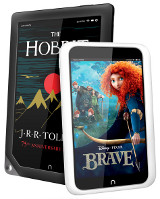 The Nook HD and Nook HD+ have some of the best displays for ereading with their high pixel density, fully laminated screens.

Both are great for reading ebooks from Barnes and Noble as well as web reading, especially the HD+ with its 9-inch screen. The HD+ is also a really good option for comics and magazines with its larger screen size.

The Achilles heel of the Nook HD tablets is their closed-in software. You can only use the Nook's reading app and the OverDrive app for reading ebooks because sideloading apps isn't allowed unless you really know what you are doing. You can sideload Adobe DRM'd ebooks and DRM free ebooks but the covers generally don't display properly, and they are more prone to various bugs. Rooting is the best way around the Nook's many limitations, but that's certainly not an ideal solution for everyone.

The Asus Transformer Infinity is one of the most well-rounded tablets on the market in terms of features and specs. It has all the bells and whistles, which includes a high resolution 10" screen with 224 ppi that's ideal for all forms of ereading. The screen even has an IPS+ brightness booster to increase readability in bright light, making it one of the brightness tablets on the market.

Like the Google Nexus tablets, the Transformer Infinity has an open operating system and can easily install any ereading app out there, and also incudes Asus's onboard reading app for ePub ebooks, and it's actually a pretty nice app feature-wise. It even supports text-to-speech and ebooks with Adobe DRM.

A couple of downsides with the Transformer Infinity is it is expensive and isn't particularly comfortable to hold in portrait view.

Both the iPad 3 and iPad 4 have screens with 264 ppi, which makes them among the highest resolution tablets on the market. Because of this they are absolutely great at displaying text clearly, even super tiny text.

Some benefits of ereading on an iPad are there are apps for just about everything, including more educational apps than on Android. Plus developers tend to put more work into iPad apps to make them look and function better than their Android counterparts.

A few downsides with the iPad as an ereader is they are very expensive devices, there's no memory card slot, and reading apps don't have in-app shopping so you can't buy ebooks from within the app itself, you have to use the web browser instead.